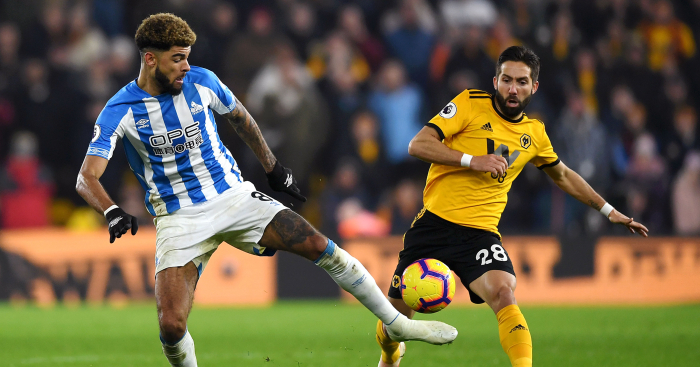 For a promoted team to sit 11th in the Premier League table with more than a third of the season gone is no crisis. Wolves are closer in terms of points to sixth-placed Everton (six) than they are to the relegation zone (eight). They have scored more goals than five clubs, and conceded fewer than all but the current top four.

But with 13 games played, things have not quite gone exactly to plan. Wolves were supposed to bring something different to the Premier League, something unique. They had built what looked to be the sturdiest platform of any promoted side in recent memory, and already felt like an established threat. While many top-flight clubs were still searching for a true identity, Wolves spent much of the summer preparing their tools to break through the glass ceiling.

They have barely made a crack in the surface. As impressive as draws with Manchester City, Manchester United and Arsenal were, Sunday’s defeat to bottom-placed Huddersfield is a crushing reminder of reality. No club with such lofty ambitions should be so thoroughly outclassed by inferior opposition in their own stadium.

Let that do no disservice to Huddersfield. They rocked up to Molineux, wiped their dirty shoes on the new carpet, raided the fridge, changed the channel and made themselves at home. Wolves tutted and muttered under their breath, but were otherwise more than accommodating.

João Moutinho and Rúben Neves are more than capable of controlling any game, but David Wagner devised a plan to nullify them. Huddersfield’s manager took the rather novel approach of analysing the opponent, identifying their strength and turning it into a weakness. It’ll never catch on.

Moutinho and Neves drowned in Huddersfield’s midfield sea, so much so that the former was removed at half-time. The pair were completely ineffective in the face of the Terriers, as Philip Billing, Jonathan Hogg and Aaron Mooy were let off the leash. The visitors used their opponent’s formation against them, outnumbering them in midfield, preventing the heart from pumping blood around the body. Wolves were rendered lifeless.

Nuno had no real answer. His two half-time changes were cosmetic, a midfielder replacing a midfielder and a winger coming on for a winger. But the machine itself was the problem, not the components within it. Nuno’s loyalty to the system is proving awfully costly. Not for the first time, Wolves paid for their lack of an alternative, a Plan B.

But keeping them quiet was only half the job. Huddersfield had to create some noise themselves, and Mooy brought on an almighty racket with his first two goals of the season. With them, Town rise from 20th to 14th. There has not been a more deserved victory all season.

Billing was the true architect. The 22-year-old was seemingly everywhere, robbing Wolves of possession one minute and creating a chance the next, somehow finding time to clear one effort off the line when the lead was just 1-0.

He is making the most of his second bite at the Premier League cherry. He started just eight games last season due to injury, but has been ever-present this campaign. He has become the Swiss Army knife of this midfield, ranking first for tackles (36) and dribbles (12), and third for shots (19) and interceptions (26).

He might not master in any particular trade, but Wolves could certainly do with someone who is a jack in all of them. Billing was exceptional in defence and an asset going forward. It was another page written in a catalogue of fine performances, and it is the sort of form that will generate ill-advised talk of an England call-up for the Dane of Nigerian descent.

With his squad of specialists upon specialists, Nuno would be delighted to share top Billing, a player adaptable to any condition. He will only get better; Wolves will pray the same can be said for them.