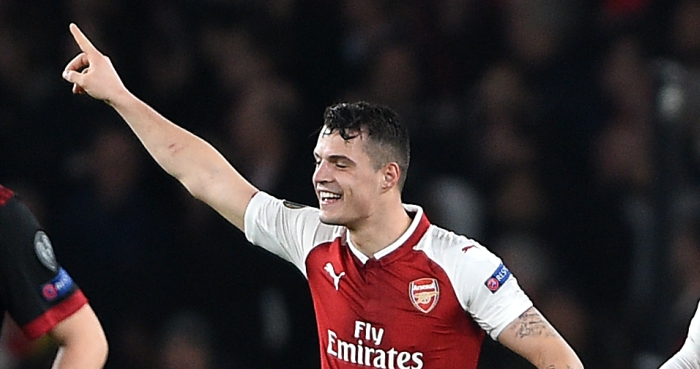 By his own admission, Arsene Wenger had “been watching” Granit Xhaka “for a long time” before parting with £33.8million to sign him. Yet the description the Arsenal manager offered at the unveiling of his new midfielder was vague enough to be lifted directly from a Wikipedia entry: “He is an exciting young player, already with good Champions League and Bundesliga experience.”

Within three months of Xhaka’s arrival in north London, it quickly became clear that Wenger had misplaced the instruction manual for his expensive new gadget. The midfielder started just five of Arsenal’s first 13 Premier and Champions League games in his debut season, initially failing to disrupt the partnership of Santi Cazorla and Francis Coquelin. “I personally prefer him as a box-to-box player,” said the manager in September 2016, before performing the perfect U-turn by November. “He’s more a deep playmaker I think than a box-to-box player.”

Not that even Xhaka himself has ever been able to provide the answer to his own conundrum. “I’m what we call a ‘six’ in Germany, a quite aggressive, deep-lying playmaker,” he declared last August. Then, speaking to the Guardian that November: “I’d actually describe myself as a fake No 10 – in other words, a No 10 that plays further back.”

If this truly is the era of the all-action midfielder, Xhaka has been the antithesis for the best part of the last 20 months. He is not a goalscorer, nor does he regularly create chances. He has a wide and varied range of passing, but was once warned by his own manager not to tackle. He does not press relentlessly, is considerably more likely to be a passenger than a designated driver, and hardly provides the most reliable foundation to build a team around.

Perhaps the 25-year-old is simply a mirror image of the side he has so often floundered in: when Arsenal struggle, Xhaka’s weaknesses are at their most evident. He is bypassed in central midfield by faster, stronger, more skilful players in the club’s most damaging defeats.

But when Arsenal prosper, the Swiss international shows glimpses of an eminently effective player. The comeback victory over AC Milan on Thursday continued both the club and the player’s recent upturn in form.

Where Xhaka controlled the first leg of the Europa League tie against the Italians at the San Siro last week, this was a more reserved, disciplined performance at the Emirates. A professional display was capped by a late goal for an ever-improving player who emerged from a potentially daunting midfield battle completely unscathed. Danny Welbeck scored twice, Aaron Ramsey was again excellent and Henrikh Mkhitaryan thrived on the left, but Xhaka was quietly the game’s best player – as well as the tie’s overall.

The immediate reaction would be to put recent refinements down to the nature of European football. Milan afforded Arsenal and thus Xhaka more space and time than they have become accustomed to in the Premier League, and the effect was obvious: the midfielder misplaced just eight of his 159 passes over both legs, and no-one was better over 180 minutes.

But this may simply be a budding partnership with Ramsey starting to bear fruit. Xhaka looks noticeably more comfortable alongside a player embracing more defensive responsibility than ever before, and his own positional awareness has been boosted in turn. Even against Watford, he thrived as Mohamed Elneny helped shoulder some of the burden. Offered more support in midfield, Xhaka is starting to look like more of an accomplished midfielder in every sense.

It has been a difficult journey for Xhaka, and this is by no means the end. For the midfielder, as for Arsenal, these past few performances have been leaps forward after almost two years’ worth of steps back. At the very least, both he and his manager seem to have finally developed a greater grasp of how best to use him.