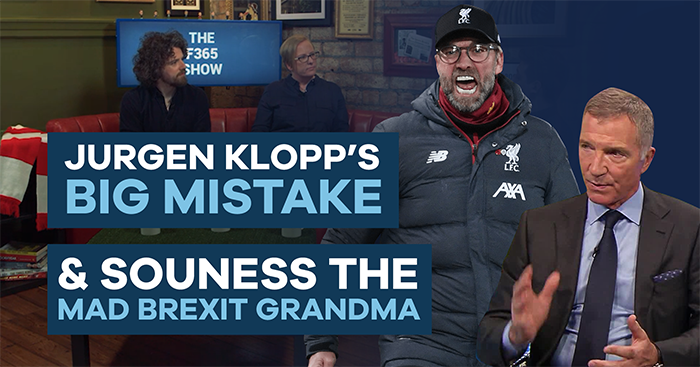 Jurgen Klopp may not care a great deal about the FA Cup, but the verdict on this week’s Football365 Show is that he made a mistake not prioritising the competition after the defeat to Watford.

Yes, that’s right. Our sponsors, World Sportsbook Competition, continue to back the show. We’re now up to four episodes and counting. Whatever next?

Anyway, having lost their chance to go a Premier League season unbeaten, Liverpool then exited the FA Cup at the hands of Chelsea, with Klopp once again making wholesale changes in the competition.

And that, according to Sarah Winterburn, was a mistake as two defeats in three games became three defeats in four. Mark Smith agrees, but returning comedian and Liverpool fan Alfie Brown just can’t get his head around the Reds being named as the week’s Losers.

Liverpool are the focus in Mailbox too, following a reader suggestion that these defeats coinciding with Jordan Henderson’s absence prove why he should be Player of the Year. Sarah is not so sure.

Wolves are our Winners of the week after beating Tottenham to move level on points with Manchester United in fifth, while Graeme Souness is described by Alfie as being like a “mad Brexit grandma” after yet another rant about Paul Pogba.

As ever, we finish with Big Weekend. It’s the Manchester derby, but do Man City even care about the Premier League or are they just playing for pride? And does that mean United are going to win? Probably not.

Watch the show below and don’t forget to subscribe on YouTube and click the damn bell to be notified every time we upload a new episode. God, we’re modern.