Home Chelsea F365, ‘you should all be ashamed of yourselves’ on Jose 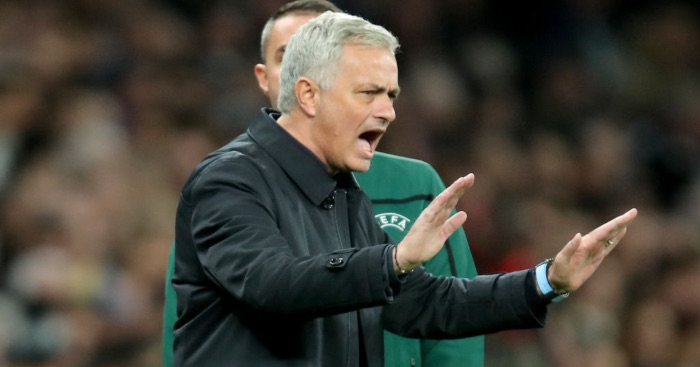 Amazing how few Liverpool mails we receive when they play poorly. Send your thoughts to theeditor@football365.com, and your votes here.

Chelsea are headless chickens
What a bonkers game!

A penalty that never was, VAR giving a seemingly offside goal, a fluke wonder-goal, a stunning save to deny a penalty, calamitous defending by the away team, atrocious finishing by the home team, a goal for Kovacic: it had it all.

Kepa had a really bad day, except for his excellent penalty save. Kovacic was on fire, what a signing he has proven to be in hindsight. If he keeps working on that finishing, I’m sure that he’s only going to get better and better.

On the evidence of this match, I don’t see Chelsea proceeding much further in the Champions League, except unless we get real lucky with the draw. The last few minutes reminded me of the football we used to play in school, running around like headless chickens behind the ball from one end to the other.

I really hope Lampard finds a tactical middle ground between attacking like Kamikaze and defending like schoolchildren. He’s got all season to figure it out. Most of the Chelsea fans, meanwhile, are enjoying the madness and are showing some uncharacteristic restraint and patience. What a strange season!
Preetish, Munich

…That was possibly one of the most stressful games I can recall watching. To give away three opportunities to the opposition in injury time to score a winner and all but eliminate us from the competition when trying to score a winner ourselves could be seen as brave but when a draw ultimately was a better result for Chelsea than Valencia, bearing in mind the respective final game fixtures, it was also bloody naive. Glenn Hoddles incredulity at Cesar Azp as the third centre back overlapping in 96th minute (before they missed a prime opportunity on the break) said it all.

On balance I thought there was huge portions of luck tonight (the air shots, our VAR goal being awarded, missed pen). However their keeper did play well and the pen was generous, even before we somehow concede another goal from the byline off the far post – just like Ajax in the last game. Basically, if we give a better team those opportunities in a later round (let’s beat Lille first!) it could be embarrassing. Kepa sums up our defence. Sometimes great – other times appearing to be allowing the opposition to score every time they shoot
Stephen Bellard

Lampard needs to fine Willian
Frank Lampard said, when the fines for tardiness was leaked, that he doesn’t want to be a dictator, just a disciplinarian. But dictator or disciplinarian Lampard needs to come down like a ton of bricks on Willian to stop him from taking Chelsea’s set pieces – especially when you have Reece James and Mason on. The man’s awful at them, and he keeps pulling rank over Reece James on set-pieces.
Larry

Oh Joe…
I’m conscious of the quick fire, Twitter-led reactionary culture that we find ourselves having to navigate daily so when I wrote this mail last night, at around the 28-minute mark of Liverpool v Napoli, I thought to myself, “No, Sam, don’t just blindly hit send, see how the match plays out and sleep on it.”

Well, I have done.

And Joe Gomez is indeed something even below the shadow of the imperious, captaincy material, defender that he was only 18 months ago. Injury cruelly changes careers.
Sam Hunter

Accusing F365 over Mourinho…
I know you probably don’t throw your own writers ‘under the bus’, but you really should take a critical look at what you’ve collectively written about Jose Mourinho over the last week and wonder if, really, you should take a step back and a deep breath and look at your body of work. I said last week that Seb Stafford-Bloor should perhaps recuse himself for a little while from writing about Tottenham, and with today’s latest offering I’m struggling to find any cohesive thread in what he’s writing.

Mourinho is an ‘arch manipulator’, he’s ‘notoriously calculating’, his every action is ‘plotted and considered’. What did he do? Subbed off a player performing poorly and praised the quick thinking of a ball-boy who got Spurs the equalizing goal. But, Seb also says, criticism of Pochettino’s reluctance to act and make a tactical substitution was a ‘minor gripe’? But it’s ‘typical of Mourinho’, who has ‘never been afraid to throw a player under the bus’.

Is it possible that a substitution can be made for tactical reasons, for the good of the team, to win a game and there’s no-one thrown under a bus, there’s no plotting, calculating, manipulating, just good game management?

Now Seb finds ‘fault’ in Jose being ‘too loyal to outdated reputations’ – in a week? In two games? For god’s sake, and he’s attempting to ‘chisel’ away at his reputation to boot?

Enough. You should all be ashamed of yourselves. Sarah for her piece written mid-game on Tuesday, John Nicholson for his ‘he’s not a winner just because he wins’ diatribe on Monday and Stafford-Bloor for rather grandiosely missing the point because the reality doesn’t fit with his preferred narrative. What would you prefer, lose to West Ham on the weekend, lose to Olympiakos on Wednesday rather than having the last 16 of the Champions League sewn up and a three-point away win (first one since January) in the bank in the Premier League?

Yes, I’m a Chelsea fan, but I’m not a Mourinho apologist, he pissed me off at times too, but for goodness sake, give the man some rope and wait for him to hang himself, because that’s apparently what you want. You’re putting the noose around his neck and kicking him off the scaffold when all he’s done is win two games out of two, subbed off Eric Dier and helped his team beat the opposition put in front of them.

By the way, I know you all secretly love him because of all the clicks.
Steve, Los Angeles

Okay, let’s take a critical look at what we have collectively written about Jose Mourinho over the last week. First, Seb wrote quite emotively about Mourinho as a Spurs fan on Wednesday. On Thursday we detailed all his numbers (good and bad, but mostly good) and then on Friday two writers had opposing views on whether he would take Spurs into the top four, with Ian Watson writing that he would. Then on Saturday Matt Stead made him our early winner, while on Monday, Daniel Storey put him top of his winners and losers. John Nicholson then wrote a piece that was not really about Mourinho at all but about the concept of ‘The Winner’ in football. Then came my piece on Mourinho and Spurs which was rather more critical of Spurs than Mourinho and ended by saying that basically there is chemistry in that relationship. Then Seb wrote positively about Mourinho’s management of Lucas Moura before writing a longer piece in which he criticised the Spurs squad while asking how it fitted with Mourinho’s usual ‘calculating’ methods. Now that’s a lot of content but to claim it is all negative is ludicrous. Though obviously we all do hate him – SW

Defending Winty
Sarah got a bit of a slating after her article ‘Sloppy and soft-centred Spurs…meet the real Mourinho’ in the comments and the mailbox. Personally I found the article very funny, chortling to myself loudly on the bus to the disdain of my fellow commuters. This may possibly be due to me having recently had a first ‘first date’ in more than ten years so her musings rang particularly true.

I didn’t see it having a big dig at Jose at all, it came across to me as very tongue-in-cheek wry humour, and indeed complimented him by pointing out when his steely, ruthless character was forced to show itself at 2-0 down he made some bold calls and the end result was a win for spurs. If anything she was subtly mocking the pantomine drama that surrounds Premier League football.
Andrew, Brighton well Hove actually
(fancy a date Sarah?….)

You sound perfect, but I am in Yorkshire (and have a wife) – SW

On that defence of Man Utd’s defence
Garry Vance’s defence of AWB and Maguire and their improvement of Manchester United’s defence, using goals against statistics, would have been much more powerful if, first, he had used up-to-date figures: it’s not 12 goals conceded but 15, which puts them not one but four behind Liverpool (and also behind three other teams above them); and the fact that in the last five seasons, they conceded the least goals in 2015-6 (35), the second least in 2016-7 and 2017-8 (28 and 29 respectively), and really only dropped the ball last year by conceding 54 goals.

It might just as easily be said that the problem is the manager – and indeed under the current rate (as opposed to Harry’s fantasy number) they are due to concede 52 over the season. Point not proven yet I think Mr Vance!
Joe, Leicester

…Garey Vance, you say that the defence has been one of Utd worst attributes over the last few years and ‘to challenge for titles you don’t necessarily need the #1 defence in the league, but you do need to have a strong defence’.

So, my questions as someone who doesn’t watch many Utd games is, was that ALL down to DeGea?
Doug, AFC, Belfast