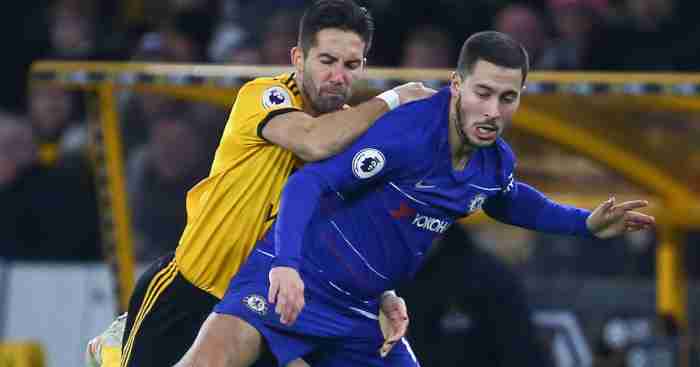 Manchester City and Liverpool’s brilliance this season makes their dominance of the PFA Player of the Year shortlist hard to argue with. So we’ve taken the ridiculous Reds and sublime City out of the equation, and this is what we’ve got…

Eden Hazard (Chelsea)
The Belgium star was the only player to make the PFA shortlist from outside the Premier League’s top two after saving his best season for possibly his last as a Chelsea player.

No player in the Premier League has had a greater attacking output this term, with Hazard’s 16 strikes and 12 assists meaning his has been directly involved in 28 goals – half of Chelsea’s total scored.

That proportion would probably be even greater had Hazard not been dragged down by his Chelsea strike partners. The 28-year-old has created 10 more opportunities from open play than anyone else in the division.

Eden Hazard has created more chances from open play in the Premier League so far this season than any other player (69).

Heung-min Son (Tottenham)
The South Korea superstar carried Spurs upon returning from the Asian Cup at the end of January, scoring three goals – two of them winners in single-goal victories – in three matches in Harry Kane’s absence.

It is becoming a common theme, with Kane crocked again and Son stepping up to cover for Spurs’ leading man with another three goals in the two-legged Champions League triumph over City. But regardless of Kane’s presence, Son’s Premier League form has been relentless since November.

After scoring his first of the campaign to help inflict Chelsea’s first defeat, Son scored eight goals and offered six assists in 12 games before being called away on international duty. If any other player outside City or Liverpool was to join Hazard on the PFA list, it would surely have been Son.

Ryan Fraser (Bournemouth)
Before the start of the season, it was Callum Wilson and Joshua King being linked with the big boys, but Fraser’s form this term has thrust him into the spotlight. Arsenal are said to be keen to take the pocket rocket to the Emirates this summer.

That should come as no surprise when you consider that no player in the Premier League has created more Big Chances than Fraser. The Scot is also aiming to break another top-flight record, with his link-up with Wilson leading to 11 goals. Only Alan Shearer and Chris Sutton have been a more effective double act in a single season, though their 13-goal partnership in 1994-95 came during a 42-game season.

11 – Fraser and Wilson have now combined for 11 Premier League goals for @afcbournemouth this season, the most by a duo since Alan Shearer and Mike Newell in 1995-96 (also 11). Update. https://t.co/cz7zq3zkO7

Pierre-Emerick Aubameyang (Arsenal)
It seems a little weird that the Arsenal striker’s success this season isn’t more widely heralded. Aubameyang is neck and neck with Sergio Aguero and Mo Salah in the race for the Golden Boot, with the Gabon forward’s 19 goals coming from seven fewer starts and 542 fewer minutes in total than Salah.

Aubameyang also has not had the consistency his peers have enjoyed, with Unai Emery utilising Arsenal’s record purchase across the front line, occasionally alongside Alexandre Lacazette.

Some wider context on Aubameyang’s first full season in the Premier League: only seven players across Europe’s top five leagues have scored more league goals this season, with only two of those having made fewer starts. If Aubameyang played for Chelsea, the top-four race would have long since been over.

Joao Moutinho (Wolves)
Wolves have enjoyed a fantastic first season back in the Premier League and despite it being a crowded field, Moutinho has stood out as their best player.

It was naively presumed by some that the 31-year-old was moving to Wolves to wind down but the Portugal veteran has been relentless all season, making the £5million paid to Monaco last summer one of the bargains of this season and a few others.

Moutinho’s pinpoint set-piece delivery has played a part in the midfielder creating more goals and almost double the number of chances of any team-mate but the former Porto star has grafted just as hard off the ball, attempting 102 tackles, the fifth highest number in the Premier League.

Abdoulaye Doucoure (Watford)
Another midfielder who has turned out to be a £5million bargain by powering his side into contention to be the best of the rest outside the top six, Doucoure’s performances this term have matched his ambition.

The Watford star hasn’t been shy in discussing his dreams of playing in the Champions League and representing France, and his displays in the Hornets’ engine room suggest neither is too far-fetched. The 26-year-old has formed one half of a dynamic midfield duo alongside Etienne Capoue to build on an impressive breakout season last year with added consistency this term, even if he wants more than the five goals scored so far.

But Watford are now set up to facilitate the step up Doucoure is so keen to make. He would command a huge fee – perhaps 10 times what they paid Rennes in 2016 – and though his exit would leave a gaping hole in their midfield should he move to Arsenal, Spurs or PSG, the Hornets have proved they can replace top talent.

I'm really uncool, so i actually made a shortlist on the train home last night: it would have been too contrary to vote for any of them, but Abdoulaye Doucoure has been brilliant and Eden Hazard, even before last night, is the only reason Chelsea's season isn't over.