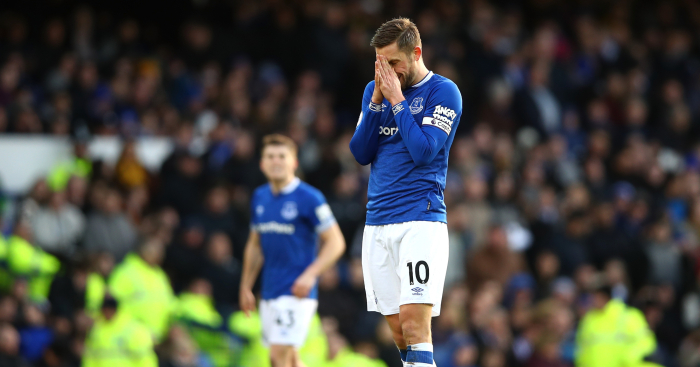 “We have to be honest and fair as well and look for the other clubs’ budget,” said Silva, explaining why Everton cannot really compete with the biggest clubs. Fair. But you cannot urge us to look at other clubs’ budget and then not be massively disappointed in this expensively constructed but pedestrian Everton side treading water in the middle section of a Premier League table sliced into three sections.

The numbers below – from The Times – might have been tweeted to illustrate the lack of spending at Newcastle, but they neatly show us just how much Everton are under-achieving after spending less than only the two Manchester clubs, Liverpool and Chelsea over the last three windows. Without the context of the squads already available to Arsenal and Tottenham, this suggests Everton should be challenging the top six. With that context, it certainly suggests they should be the best of the rest. That was the least expected of Silva when he took over Everton this summer.

Spending over the past 3 windows in this mornings paper.. #NUFC pic.twitter.com/CgPDtgtIeV

Against Leicester on Tuesday lunchtime, they were abysmal. They were sloppy, slow, lacking in dynamism and prone to defensive errors. It’s true that Leicester were little better but when Silva said after the game that the Foxes were “waiting for our mistake”, he must also have known what Leicester knew: that mistake was always coming. That’s been the hallmark of this Everton side all season; the problem is that that now they have stopped doing anything else right.

Silva blamed nervousness and looked confused by that nervousness. But of course they are nervous; they have now won just one of their last eight Premier League games after going into the Merseyside derby against Liverpool in excellent form. Writing that they went into that game not as equals, but certainly as rivals, now looks ridiculous, but it acts as a perfect bookend to a rotten chapter for Everton. They have not kept a clean sheet in those eight games, adding to a weight of evidence that Silva cannot organise a defence.

That did not seem quite such a big problem in autumn when Everton were scoring 11 goals in five games, but the winter has been cruel and the Toffees have now failed to score in successive Premier League games for the first time since last January. Back then they were thwarted by Manchester United and Tottenham as Sam Allardyce opted for damage limitation; to be so easily blunted by Brighton and Leicester a year later is simply embarrassing.

There is little doubt that the players are fatigued – seven of the starting XI against Leicester were starting their fourth game in ten days. But some of the blame for that fatigue must be laid at the feet of Silva, who – barring Seamus Coleman – picked his first-choice side against Leicester regardless of their energy levels. Andre Gomes looked slow of feet and thought, while Richarlison was clearly heavy-legged. Silva has the shortest injury list in the Premier League but has utterly failed to use his squad over this festive period. It’s at this point that you remember that Silva’s Watford was similarly poor over the same period last year.

The good news for Everton is that they now have a 12-day Premier League break and resume with games against Bournemouth, Southampton and Huddersfield. The bad news is that this Everton side looks a million miles away from being able to take advantage.