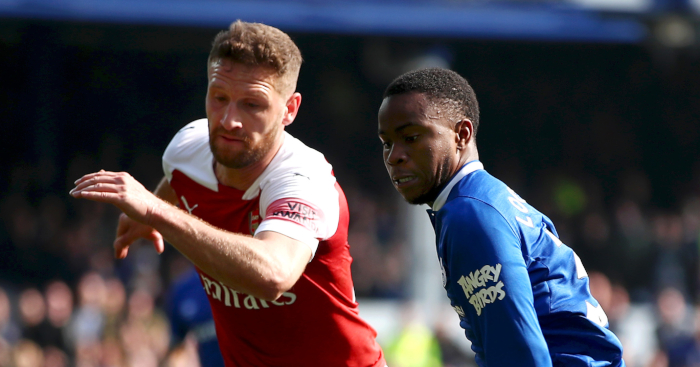 Unai Emery had clearly not checked the statistics before outlining his Arsenal transfer plans. The Spaniard pledged to “find and sign young players and develop our players in the academy” this week, but also to purchase ready-made stars “like Van Dijk with Liverpool”.

Shkodran Mustafi might have pointed out that he has made more tackles, completed more interceptions and lost fewer headers than the Dutchman this season. But it would have been akin to one of his typical two-footed lunges: rash, unnecessary and completely out of place.

It is fascinating to think that less than three years ago, Mustafi was intended to have the same transformational effect on Arsenal’s defence as Van Dijk on Liverpool’s. He was supposed to change their entire outlook, alter their attitude and reshape their approach. But Mustafi, once the long-awaited answer to a perpetual north London question, is now simply part of the working out that has been scribbled in the bottom corner of yet another scrunched-up page.

The German was actually one of Arsenal’s better players in the defeat to Everton at Goodison Park. Or at the very least, he was not their worst. He was at fault for Phil Jagielka’s first-half winner and deservedly booked for a second-half foul on Dominic Calvert-Lewin, but was far from the most culpable in a red and white shirt. Ainsley Maitland-Niles was poor, Matteo Guendouzi was ineffective and Mesut Ozil was anonymous.

Lucas Torreira in particular was missed, while the decision not to start their “perfect” strike partnership looks like a mistake in hindsight. But an Arsenal backline marshalled by the fifth-most expensive centre-half in Premier League history were torn asunder by the hosts.

Everton had 23 shots, 17 of which came in a second-half onslaught at a time when Arsenal were chasing the deficit. The only thing that prevented a more damaging scoreline was the profligacy of Marco Silva’s side, with Gylfi Sigurdsson alone having as many shots (7) as the visitors.

What Arsenal lacked – and what Emery suggested he will target in the forthcoming months – was a leader. Van Dijk has been sublime for Liverpool but his performances are almost beside the point: he has embraced his role as the all-conquering, all-seeing commander guiding the blind. He has improved everyone, not just himself.

Mustafi moaning at Maitland-Niles. The rest of the Arsenal team have their heads down. No-one talking. No-one leading. This is the sort of display that could completely kill their momentum.

He has alleviated Liverpool’s concerns whereas Mustafi has compounded Arsenal’s. The German has strolled into a dressing room afraid of the dark and promptly switched off the lights, donned his sunglasses and wondered what has brought about the subsequent sense of dread.

It may seem harsh to rest the blame solely at the his feet, with Sokratis and Nacho Monreal similarly guilty. But Mustafi was the third-most expensive centre-half in history when he joined the club in August 2016, and will be in the top eight by the start of the summer.

Lucas Hernandez and Eder Militao’s respective moves to Bayern Munich and Real Madrid push the Arsenal man a little further down the list, two players signed as much for their versatility as their youth. But Mustafi, who turns 27 in less than two weeks, often gives off the impression of a defender who struggles with the demands of one position.

He is similar to Van Dijk in that he leads by example, but that example is entirely the wrong one. He radiates panic where the Dutchman exudes calm. Even in one of his first interviews as an Arsenal player, the sense of anxiety was palpable. “Of course, this is an incredible sum,” he said of a price tag that was described as ‘more than £35m’ when he signed. “And I know what a burden that can bring.”

Van Dijk saw it not as a “burden”, but as a reward. “It doesn’t make me nervous,” he said last January. “It’s a big compliment to myself for the hard work I’ve put in so far, that Liverpool are willing to pay that much money.”

Neither are impervious to mistakes, but the sense with Mustafi is that he is due at least one a match, whereas Van Dijk will make no more than one a month. That naturally has an effect on the respective defences and goalkeepers behind them.

Bernd Leno can be thanked for keeping Everton at bay on Sunday, with his defence letting him down on the one occasion he could not help. Lucas Digne’s foot was well over the line from the throw-in but that does not excuse Mustafi for losing the first header to Jagielka, nor for leaving his fellow centre-half completely unmarked to tap in the subsequent loose ball from no more than six yards out.

It meant Arsenal’s wait for a Premier League clean sheet away from home this season continues. But it also means the Gunners have still kept more clean sheets in 14 games without Mustafi starting (8) than in 33 with him in the side (7) in all competitions this season.

It is no crime to not be as good as Van Dijk, but Mustafi has cast himself as the Joel Matip of any potential centre-half partnership at Arsenal – a solid defender prone to error. He should fear for his future.