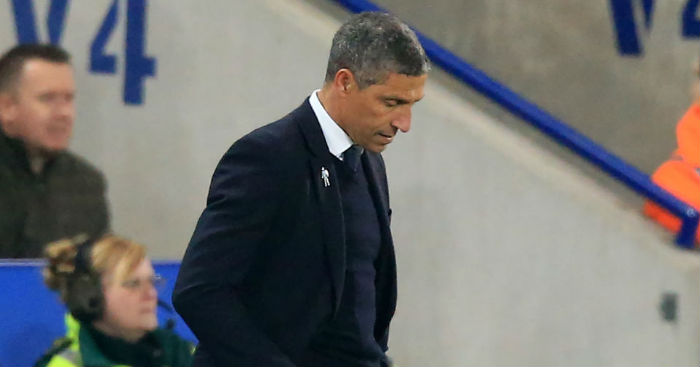 At the turn of the year, things were looking rather good for Brighton. They were sitting in 13th place, ten points away from the relegation zone, and four points behind Wolves in seventh.

The Seagulls were part of a solid mid-table cluster that also included Bournemouth, Everton, Leicester, Watford, West Ham and Wolves. They are the only one of that group to have slipped away in the second half of the season. And boy have they.

Brighton haven’t beaten Premier League opposition since January 5, when they defeated Bournemouth in the FA Cup. They are still yet to win a Premier League game in 2019, and are now 16th, just three points from the drop zone. By the end of tonight’s games, that gap would be cut to just two if Southampton can avoid defeat.

Peter Goldstein recently argued very convincingly that Brighton were overachieving during that relatively good spell earlier in the season, and this is a deviation back towards their mean – a position supported by their xG.

The issue is that while their 2019 form has reverted them to the “right” league position, the pendulum has now swung so far back the other way that they find themselves in real danger. Since the start of the year they have taken fewer points than any Premier League side: just two. Even Claude Puel’s Leicester and Huddersfield have each taken four.

There is a compelling argument that, having only been promoted a couple of years ago, the bottom reaches of the league were always likely to be the limit of any reasonable expectations on Brighton; that finding themselves bravely fighting against relegation is no shame, much as it isn’t for Cardiff or Huddersfield. That position is not at all unreasonable.

Where Brighton fans might have more of an issue is that they have completely failed to improve their squad this season, despite a huge number of recruits at considerable expense.

There are no sure things when it comes to transfers for clubs of Brighton’s standing, so any transfer business is likely to be hit and miss at best. Bournemouth, in particular, have attracted criticism for an especially spotty recruitment record.

But Brighton aren’t so much spotty as outright wasteful. According to Transfermarkt, since gaining promotion ahead of 2017/18, Brighton have spent £135m on 27 permanent signings: 11 for a combined £58m last season, 16 for £77m this season. Out of those 27, only four (Mat Ryan, Davy Propper, Pascal Gross and Martin Montoya) have played more than 50% of Brighton’s Premier League minutes since signing; and of those four, only Montoya was a new signing this season.

Ten of those 27 signings were kids, which is some mitigation, but that still leaves 17 players who were aged 23 or over when they were signed. To sign 13 senior players and barely even play them is a terrible use of resources, even after you account for lengthy injury layoffs like the one this season’s big signing Alireza Jahanbakhsh is only just recovering from.

That may come down to loyalty on Chris Hughton’s part, depending on how you want to paint it. There are seven Brighton players from their Championship days who have played more than half of Brighton’s Premier League minutes since their promotion (Lewis Dunk, Shane Duffy, Dale Stephens, Glenn Murray, Solly March, Gaetan Bong and Anthony Knockaert).

But regardless of how admirable that loyalty may be, the failure to integrate new players despite having bought plenty of them leads us to one of two conclusions: either Brighton are identifying and purchasing good players but Hughton refuses to play them, or they are spending a lot of money buying players who are worse than the ones they already have.

Both are equally damning, but each requires the club to take different corrective actions ahead of the next transfer window. Their main priority for now is to stay in the Premier League, and their next three or four league games look like they will either rescue them or keep them in danger: Huddersfield (h), Palace (a), and Southampton (h), with a postponed home tie against Cardiff that should also be part of that run.

But once their league fate has been decided one way or the other, it is imperative that Brighton set about identifying the errors in their recruitment process and work to put them right.