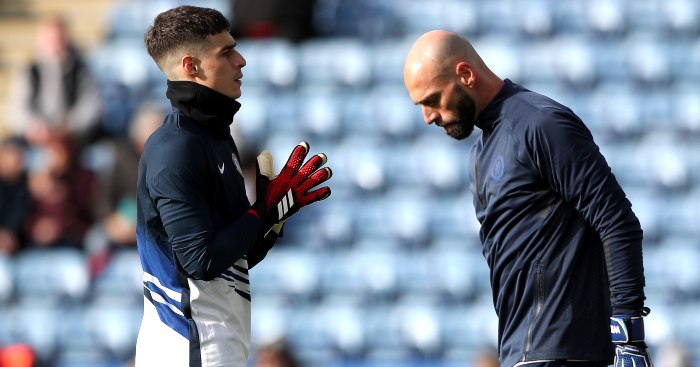 For Lampard, enough was enough. Kepa watched from the bench at Leicester while Willy Caballero took his place – a predicament we know riles the world’s most expensive goalkeeper.

“With goalkeepers, it’s a decision we don’t take lightly,” said Lampard ominously. This was not a manager offering an underperforming player a breather; it was Lampard giving his No.1 a kick up the arse, a warning to the 25-year-old that his performances have consequences.

"It's a decision I've made and I think with goalkeepers it's one I don't take lightly."

Some tough playing decisions to be made by Frank Lampard as Caballero starts in goal and Tammy Abraham plays through the pain barrier.

The only consolation for Kepa is that Lampard twice referred to a decision made “for this game”. Caballero was little more secure in Chelsea’s concession of two second-half goals sandwiched by Antonio Rudiger’s headed brace. Should he react to his removal in the right manner this time, there is every chance he could be back in the Blues’ net when Manchester United arrive at Stamford Bridge a fortnight on Monday.

If the £72million stopper is given a chance to redeem himself at the next opportunity, it is one he really must grasp with more assurance than some of the crosses that have been thrown into the Chelsea box over the last 18 months.

Kepa has offered little evidence of value for money and while his performances have been underwhelming, his statistics are dire.

This season, only Angus Gunn has saved a smaller percentage of the shots he has faced, and the Southampton keeper was dropped three months ago as a result. Kepa has kept out only 55.56 per cent of the attempts on Chelsea’s goal, while his ratio drops to 50 per cent when you consider only shots from inside the box. Further out, no keeper in the Premier League has saved a lower percentage of efforts from beyond the penalty area.

In contrast, Alisson, who cost Liverpool £5million less last summer, is operating at a ratio of 84.21 per cent overall, while Kepa’s rival for the Spain jersey, David De Gea has kept out 67.78 per cent of the shots he has faced.

The concern over Kepa’s contribution stretches back before the start of this season. In terms of saves percentage since he arrived in the Premier League from Athletic Bilbao, the Chelsea keeper on 63 per cent is in the bottom four of 27 goalkeepers who have played at least 20 games. The three below him – Asmir Begovic, Gunn, Jonas Lossl – and Wayne Hennessey above have all been replaced.

Opta says Kepa hasn’t yet made a mistake that has led to a goal though Lampard knows differently. The Premier League errors may not be calamitous but he has let Chelsea down on occasions a top goalkeeper would be expected to make big saves. Kepa has suffered too in the Champions League.

Kepa won't want to look at this again! 😬

Late drama at the Mestalla means Chelsea share the points with Valencia.

Group H is going down to the wire… pic.twitter.com/CPchOnHnJp

His struggles have been more subtle than, for example, his compatriot Roberto in the West Ham goal. Kepa hasn’t been throwing them in his own net but we still don’t know exactly where his strengths lie. His shotstopping is worrying; his distribution is average; and he struggles to dominate his area.

Playing behind an inconsistent defence perhaps has not helped Kepa. Lampard has frequently changed the shape of his rearguard and the personnel within it. But the presence of a world-class keeper should stabilise a defence, regardless of the inconsistencies running through it.

And Lampard’s tone suggests he is not willing to listen to excuses. If Kepa fails to heed this warning, Chelsea will find a goalkeeper who catches on more quickly.