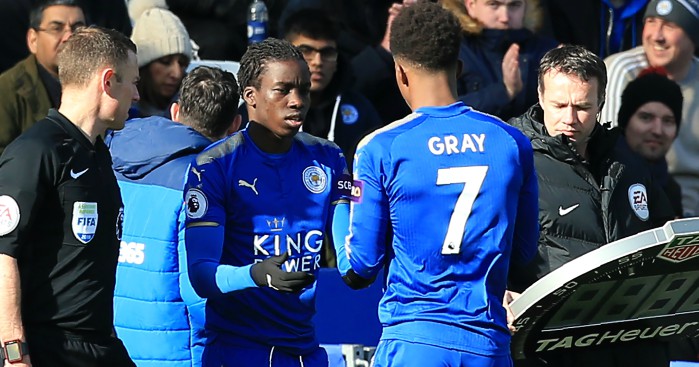 Few players at Leicester would have been happier than Demarai Gray to see Claude Puel replace Craig Shakespeare back in October. Given the French manager’s reputation for putting his faith in young players, it seemed like the right appointment at the perfect time for the winger, who was willing to spread the blame for his own stunted progress.

“Being in and out of the team is not good,” he said in November. “I know what I’m capable of… Over the last 18 months I’ve been held back a bit. Since Puel came in, I feel I’m going to get more chances.”

Having just started the first two games of Puel’s reign, it was a reasonable assumption for Gray to make. Across spells at Lyon, Nice, Southampton and Leicester, Puel has given 29 per cent of the playing time he has had to offer since 2008 to under-23 players. No other manager in Europe’s top five leagues can match the Frenchman’s faith in youth.

Couple that with Gareth Southagte’s willingness to offer England’s Under-21 regular an opportunity at senior level, then you might forgive Gray for expecting this season to be his breakthrough year, at club and international level.

Perhaps his expectation – maybe a sense of entitlement? – has played a small part in the 21-year-old’s struggle to properly seize the opportunities he has been given. Against Stoke at the King Power Stadium, Gray again failed to prosper.

Trusted with a central role, behind Jamie Vardy with Riyad Mahrez and Marc Albrighton flanking him, Gray failed to make any notable impact against a Potters side fighting for their lives.

In a first half during which the hosts enjoyed two-thirds of the possession, only lone striker Vardy had fewer touches than Gray, with Mahrez and Albrighton either side of him considerably more involved. Gray managed to create one half chance, but when his number was up on the hour mark, many might say it was overdue.

Stoke, Geoff Cameron in particular, deserve credit for snuffing out Gray’s threat and cutting off Vardy’s supply line. They defended narrowly, with Maxim Choupo-Moting and Xherdan Shaqiri keeping Leicester’s full-backs in check, and though they had to weather a late storm, Paul Lambert’s side deserved a point for their graft and industry. Entertaining they are not, but Lambert’s priority was to bolster the Premier League’s worst defence. They were a Jack Butland error away from a third clean sheet in five.

But, regardless of the Stoke’s renewed vigour in defence, these are the games where Gray has to repay Puel’s faith by making a difference. As has been the case too often since he was discussing the prospect of an England call-up in November, the former Birmingham attacker flattered to deceive.

Though he has scored three times since Puel took charge, Gray has not created a Premier League goal for a team-mate since December 2016. Indeed, all of the the attackers he started alongside against Stoke, plus Kelechi Iheanacho, have created more opportunities per 90 minutes in open play since the Foxes switched managers.

Tottenham and Bournemouth both had offers for Gray in the region of £30million rejected at the end of the summer window, but Spurs are probably grateful for Leicester’s refusal to sell, given they have since picked up Lucas Moura, an experienced Brazil international, for £5million less than that figure.

Gray cannot effect the market forces but now, nor can he bemoan a lack of regular first-team opportunities. The attacker spoke in November about the need to be consistent, and moving across the forward line perhaps is not conducive to finding and retaining his rhythm. But having also discussed his hopes of a senior call-up in time for the World Cup, it seems Gray needs to take a step back and focus on making a regular impact in the Premier League.

Puel enjoys giving youth its chance, but as his post-match comments about Leicester’s lack of “attacking desire and consistency” suggests, the manager’s patience is not limitless. Especially when the arrival of Fousseni Diabate in January means the Foxes boss has other young players in which to place his trust.