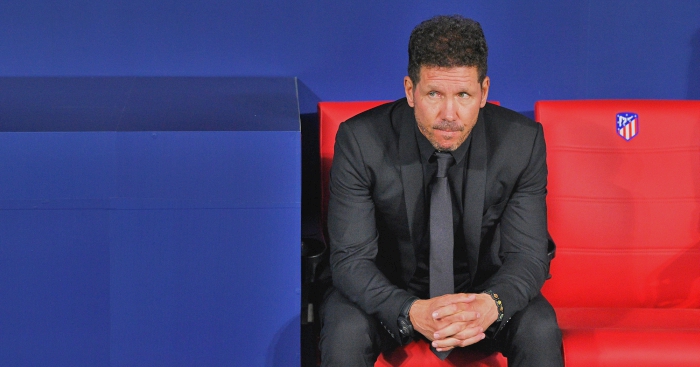 As the individual who presided over the most remarkable period of sustained success in modern football history, Sir Alex Ferguson can probably be considered something of an oracle when it comes to management. His style, personality, approach and the circumstances surrounding his prosperity are impossible to emulate, but that will not prevent the majority from trying.

Diego Simeone never faced the Scot as a manager, but Ferguson left an indelible mark even on those he never encountered in the dugout. “I see myself staying for a long time at Atletico,” Simeone said in December 2013. “Some said I could even become the Colchonero Ferguson. That man was football.”

Almost four years on from those comments, it is unthinkable that Simeone could last another season at Atletico Madrid, never mind two more decades. A 1-1 draw with Qarabag leaves the Spanish side needing a near-miracle to avoid a group-stage knock-out.

In a way, Ferguson foresaw this demise. “I always believe a four-year cycle is probably the most you can achieve,” he once said. “There are very, very few teams who can create more than a four-year cycle.”

The Scot’s point is more apt than ever. Atletico have finished Champions League runners-up twice in the last four seasons, reaching the quarter-finals and semi-finals in the other two campaigns. They won La Liga in 2013/14 and have secured third-place finishes in each of the subsequent three seasons. No club has done more to bloody the noses of Barcelona and Real Madrid than Simeone’s Atletico.

But their cycle might be up. This is still a side captained by 34-year-old Gabi, while three of the defence who started the first game of their triumphant 2013/14 league season were called upon against Qarabag. Diego Godín is now 31, while Filipe Luís and Juanfran are both 32, and look nowhere near as impregnable as they did four years ago.

Qarabag were even reduced to ten men for the final half an hour but, much like when Atletico boasted a man advantage for the last 15 minutes in their first meeting a fortnight ago, Goliath failed to make David pay. They had 35 shots to Qarabag’s four, but it was the hosts who had to fight back from a goal down at the Wanda Metropolitano.

Our tactics are so negative that teams simply aren't afraid to bring the game to us, and they shouldn't. Simeone hasn't got a damn clue.

If the suggestion is that Atletico are struggling to acclimatise to their new home, their away record provides yet more cause for concern. They have won just three of nine games on their travels this season.

The foundations for Simeone’s previous success do remain. Atletico are eminently difficult to beat, and do not concede many. They have lost just once in 19 games since being humbled by Cristiano Ronaldo in the second leg of their Champions League semi-final in May. They are unbeaten and fourth in La Liga, level on points with Real Madrid. Only Barcelona and Leganes have conceded fewer goals domestically.

But their record in front of goal is abysmal. They have not scored more than once in each of their last eight games, have been outscored by seven clubs in La Liga this season, and no player has more than four goals after 15 matches. They have had the joint-most shots of any side in the Champions League this campaign (79), yet only Benfica, Anderlecht, Maribor and APOEL Nicosia have scored fewer than their two goals, one of which was a penalty in defeat to Chelsea. They have drawn almost twice as many games (9) as they have won (5) this campaign.

With the attack misfiring and a previously impervious defence showing signs of weakness against even the easiest opposition, Simeone is feeling the pressure. But the Argentine’s insistence that his style is not the problem is alarming. “We always play in this way and it has been successful,” he said after the Qarabag draw. “During my six years at the club, there have been 30 or 40 times we have won games like this.”

Ferguson would know only too well that one of the keys to management is reinvention, and evolving one’s style to stay ahead of the competition. Simeone’s foolishness in trying to recreate past glories is a proven recipe for trouble in the future.