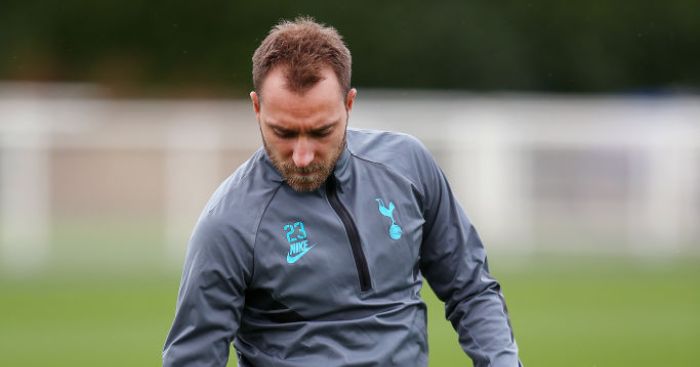 It was the little moments during Tottenham’s biggest Champions League win that made the most sizeable impression. Erik Lamela sliding to retain possession by the corner flag in the penultimate minute of a 5-0 victory; Dele Alli shifting seamlessly between a deeper and more progressive role; corners not only clearing the first man but producing the first of five thrilling goals. Perspective is sorely needed, but this was a start.

For some, it was much closer to an end. A thought must be spared for Christian Eriksen, the player with no obvious future.

Gaz grilling Jan over poor marking. Backline fuming over an incorrect corner decision at 4-0. Lamela's work rate and slide tackle in the last minute of the game. These small moments last night meant more to me than the goals and scoreline. #THFC

Mauricio Pochettino was asked after drawing with Watford why he had made seven changes to his side, and offered a measured response when pointing out that the international break rendered that observation redundant. But he will acknowledge and accept that managers rarely inhabit a middle ground. Their tactics are either good or bad, their mood happy or furious, their position secure or shaky, and their decisions absolutely right or irrefutably wrong, as instructed by hindsight based only on the result.

So to Tuesday, when everything he touched finally turned to gold. Ben Davies over Danny Rose, Tanguy Ndombele ahead of Harry Winks, Son Heung-min rather than Lucas Moura and a return to a 4-2-3-1 formation all contributed towards Tottenham’s best performance in months. If Pochettino is to be questioned after every setback, he should be given credit when he does provide the right answers.

Lamela as an alternative to Eriksen was the most notable call. The difference in quality between the two is negligible, although the latter has certainly proven his ability far more often. But on a night and at a time when fight and flair are needed in equal measure, there can only be one winner of that battle.

Where Lamela seems to take defeat as a personal affront, Eriksen lacks something intangible. There is an absence of aggression, a deficit in doggedness. He covers every blade of grass, but there is a difference between hard work and dirty work, and Tottenham have plenty of facilitators when they need catalysts.

Ndombele and Moussa Sissoko offer enough energy, protection and drive in central midfield to counter Eriksen’s creativity. The same can be said for Son, Lamela and Kane possessing the sort of understanding, pace and skill that renders playing someone behind them overkill. The penny dropping for a more focused, sensible Alli leaves no space for Eriksen.

In the summer, he was a Champions League finalist stood at a crossroads with every exit signposted by glory and success. Real Madrid were directly ahead, Barcelona was to the left and Manchester United a quick detour right. Juventus, PSG and Atletico Madrid were all potential destinations. Even extending his Tottenham contract was an option.

But in failing to choose a direction or even indicate, Eriksen must have known he was in danger of stalling. If his idea was to showcase himself for a January move or lucrative summer switch, he would have done well to remember that his manager suffers contract-based tomfoolery about as lightly as Michael Owen dives in Sapporo.

Eriksen will feature again this season, but surely not so prominently; he could only ever afford to be blase about his future while others at Tottenham failed to step up. Now he has been usurped in the queue, his is a career cryogenically frozen until it thaws out in the summer.

Any attempt by a Tottenham player to bluff Pochettino will only ever result in them being removed from the table. He demands complete dedication, professionalism and focus on the club instead of the individual at all times. Those that climbed into the trenches with him on Tuesday will be rewarded when more daunting wars are fought, such as on Merseyside this weekend. Others must solider on without that trust.