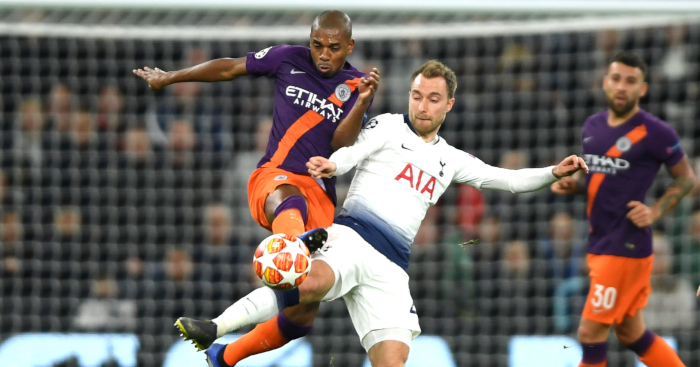 Fernandinho’s importance to Manchester City is one of the strangest (and dullest) debating points in English football. Strange, because a club with their resources shouldn’t still be so dependent on a player well into his thirties, and dull because that seems to have been the case for a really long time.

That means, also, that Fernandinho must be well-used to that role; he surely understands his importance to Pep Guardiola and, more specifically, the Abu Dhabi Group’s pursuit of their white whale, the Champions League.

Which makes his extracurricular activity on Tuesday night difficult to rationalise.

First, some mitigation: Pep Guardiola clearly instructed his players to be physical. City have smart tactical fouling within their repertoire, but they’re hardly known as anarchic side – and why would they be, they needn’t depend on anything other than their ability.

So Tuesday night created an odd aesthetic. It made some sense, because Guardiola’s only defeat to Tottenham, back in his first season and at original White Hart Lane, saw his side over-powered and their finesse trampled under the hooves of Pochettino’s hard runners. With Spurs energised by their new ground finally opening and by the occasion itself, maybe he reasoned this to be a sensible counter-measure – a deterrent, perhaps.

Perhaps, but City have out-played Spurs on four straight occasions since, home and away (winning three, drawing once), and so it hints of a strange sort of paranoia.

And that paranoia seemed to infect Fernandinho, whose double elbow on Harry Kane should have drawn a red card. It was a strange incident, one which gets worse every time it’s shown. Slow motion makes everything looks more serious and, in this case, probably exaggerates what in reality was quite a feeble contact. But the intent was still obvious: the Brazilian first tried to strike Kane in the back of the head while falling and that contact could feasibly been deemed an accident. But then he gave himself away by having a second go with the referee only yards away.

It was ugly. Yes, what about this, what about that. What about, what about, what about. I’m sure there are dozens of other grievances, real and imagined, that have been taken from that game, but they’re incidental. Tottenham won anyway. The point, then, is not to moan over a bad decision or to take more shots at VAR – who really understands the referral system properly anyway? – but to wonder what a red card might have done to City.

They’ve won the League Cup, which everybody has already forgotten. They’ll likely win the FA Cup too, but they’ve done that before and it was never among the season’s primary ambitions. And, even if they do win the Premier League, it seems certain already that Liverpool’s story, whatever that ends up being, will become the primary focus.

In effect, Fernandinho jeopardised City’s progress in the one tournament which remains strategically significant. Unnecessarily, too. Spurs shouldn’t be beating them over two legs. Yes, they are a strong, competitive side, but City are operating in a different stratosphere, with two or three players in every position.

Every position except one. Fernandinho is a brilliant footballer, he probably isn’t celebrated for that nearly enough, but he came close on Tuesday night to driving his own side off the road. A road which, at the moment, looks like a clear run to the European Cup. Real Madrid and Paris Saint-Germain are already out, Barcelona and Bayern Munich are not the forces they usually are, and – for once – the continental stars are aligning for City.

So, with respect to the other teams in their side of the draw, all they really have to do to reach a first final in their history is not make a mess of the next three games. Fernandinho very nearly did that. A 1-0 deficit is manageable, City should still go through, but a first-half red card might have created an irretrievable deficit for them and a critical suspension for him.

And how can he and they not be wise to that? Because of the superiority they enjoy, City regularly encounter teams who try to bend the rules in an attempt to eradicate their advantage. That even happened on Saturday at Wembley, when Brighton’s players went to ground time and again in pursuit of decisions to which they weren’t entitled.

Brighton evidently felt they had nothing to lose. City, in this situation, had everything to lose. To put themselves at the mercy of the referee unnecessarily – by seeking a physical superiority which their football has never depended on – was just bizarrely self-defeating.

One other point and a theoretical scenario: what happens if City do canter past Spurs next week and do build a commanding lead after, say, an hour – the temptation for one of Pochettino’s players to take some retribution might be overwhelming. That’s the depth of the problem that Fernandinho has created: he avoided sanction on Tuesday night, but he’s also created a festering animosity in a two-legged tie with a quick turnaround, and – given their technical superiority – that’s a complication his side can do without.

Tottenham wanted this tie to be nasty; it suits them. Fernandinho and his manager played into their hands.