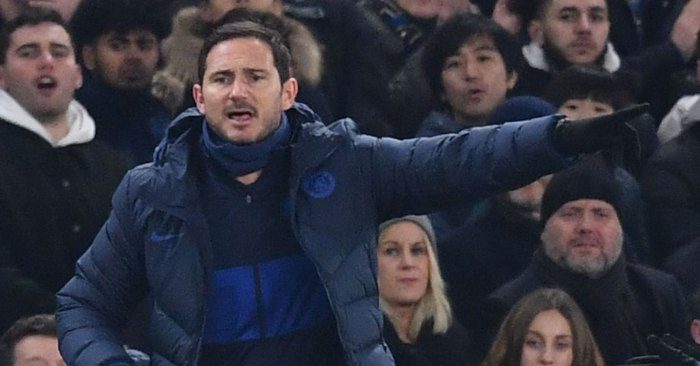 It’s starting to get a bit worrying now.

The speed of Frank Lampard’s promotion through the sport has meant that he’s been elevated to a high position, but still with the benefit of various asterisks. Chelsea have been working under a transfer ban, so that has to be factored into all of their defeats. Lampard himself is only in his second full season as a head coach, so any criticism can’t be too harsh.

Happily, though, Mikel Arteta is even more inexperienced and Arsenal still managed to take a point from Stamford Bridge, despite being reduced to ten men in the first half and being without their best player through suspension. And that really didn’t reflect well on Lampard.

Mainly because this was a situation he’s now encountered almost half-a-dozen times and for which, still, he has no answer. Arsenal’s disadvantages on Tuesday night were unique to that situation, but the red card effectively reduced them to being the kind of deep-sitting, low-risk side that Chelsea have struggled with at home all year.

At Stamford Bridge, Lampard has lost to West Ham, Bournemouth and Southampton, two of which were mired in crisis at the time. The recent defeat away to Newcastle also belonged roughly to the same category and represents the same sort of failure. There is a template now for reducing Chelsea and when it’s followed properly, the result is becoming oddly predictable.

‘Oddly’, because Lampard doesn’t seem able to think his way around this issue. After bad results he often speaks eloquently with the press, talking convincingly about what needs to change, what his side didn’t do well enough, and why they weren’t able to overcome those issues. And then, like night following day, Chelsea run into an opponent of similar profile and give exactly the same performance, full of identical shortcomings.

The first instinct after Tuesday night was to praise Arsenal. Rightly, because they defended well and took their goals efficiently. Read 16 Conclusions for more. But they did what Chelsea allowed them to do. They defended well because Lampard’s players didn’t circulate the ball around the box quickly or accurately enough. And they were able to take a point from a game in which they had two shots on target because they were facing a team who attacked in slow, predictable patterns which Mikel Arteta’s patchwork defence could easily repel.

The problem isn’t that Chelsea are inconsistent, because they’re still in an advantageous league position, it’s that they don’t seem to be growing as a team. Their ability to create chances at home seems instead to depend on what individual players can do – Lampard needs Callum Hudson-Odoi to beat a man, for instance, or for someone to come up with the perfect cross. There isn’t much method here, nor any real identity within Chelsea’s play. What, after all, do they really do other than get the ball to the feet of their playmakers as often as possible and hope for the best?

The question, then, is why aren’t these disappointing results informing an improvement? Why are Chelsea still missing the necessary gears to exert their superiority over weaker opponents or, in this instance, a team put at a disadvantage by the referee. Between them, Arsenal, Bournemouth and Southampton have some of the most porous defences in the country, and yet they have all been able to make Lampard’s attack look anaemic.

What is the cause of that problem? What does it say about the people who can’t cure it?

Lampard is still due the benefit of the doubt, because relatively speaking it’s still very early in his career, but what he was as a player and his likeability as a man will only excuse this shortcoming for so long.