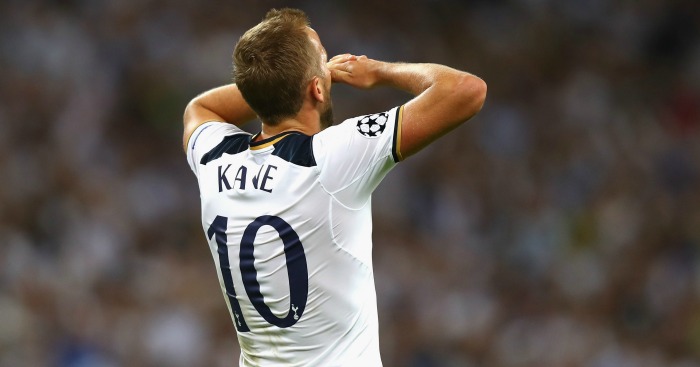 Sorry Tottenham fans, but it’s happening again. During a week in which three of England’s four Champions League clubs gained positive results, all ‘early loser’ eyes were clearly focused on Spurs. There’s nobody in lily-white sweating under the spotlight quite like Harry Kane.

Kane has been a broken record over the last three months. He first pledged to “prove the doubters wrong” in June after a dismal showing against Wales in Euro 2016 led to his half-time substitution. By September, that same hymn sheet was being recycled again.

“Unfortunately there was a lot of talk last year and I managed to prove a lot of people wrong,” Kane said. “People will talk this year as well, but it’s part of football. It’s what they are doing, but I am confident in my ability and I know that if I continue doing what I am doing, the goals will come. I think I didn’t score in my first 7 or 8 games for Spurs last season, but I then went on to win the Golden Boot. That proves that it was just a matter of time.”

Kane’s case-swaying piece of evidence is presented to the court each time: that run of eight games without a goal at the start of last season, followed by an astonishing run of goalscoring. From one Premier League goal by mid-October to 25 goals (and the Golden Boot) by mid-May. We have no choice; we must trust Kane’s word.

Yet last season’s response does not give Kane immunity from criticism. The striker might be publicly dismissing any talk of struggles, but in private he must be worried. Mauricio Pochettino must be too. Against Monaco, Kane was busy outside the penalty area, regularly winning corners, but looks lost in front of goal. His shot straight at Danijel Subasic when presented with a glorious second-half opening epitomised the mood; the radar is on the blink.

Kane’s “if I continue doing what I am doing, the goals will come” claim also fails to bear scrutiny when examining the statistics. During his six-game Premier League drought at the start of 2015/16, Kane was averaging a shot every 24.5 minutes and a shot on target every 128.5 minutes. This season, those figures have increased by at least 30% on each measure. Kane has taken a shot in the league every 37.2 minutes, and managed a shot on target every 167.5 minutes.

Strap in for the damning statistic: In 335 league minutes, Kane has touched the ball ten times in the opposition penalty area. By way of comparison, Raheem Sterling leads the way with 39. Fernando Llorente has 36, Diego Costa 34 and Zlatan Ibrahimovic 31. Romelu Lukaku, who has played 231 minutes to Kane’s 335, has had almost three times as many penalty area touches. Is Kane dropping deep in search of the ball a la Wayne Rooney, over-compensating through a desire to play his way back into form? Perhaps.

Of greater concern is the decline in Kane’s all-round game in comparison with a year ago. During that six-match league drought, he created a chance every 57.1 minutes and completed 20.3 passes per game. This season, it’s a chance created every 111.7 minutes and 14.5 passes completed per game. It’s a small-ish sample size, but these are notable differences. In every area, Kane has regressed.

After the Monaco defeat, Gary Lineker suggested that an “exceptional” workload might be holding Kane back, and Matt Stead advised that a period of rest could be Kane’s saviour right here. Pochettino and Kane might consider a home game against Sunderland as the perfect tonic. Fail against the Premier League’s worst team on Sunday and these dissenting murmurs will only grow in volume.