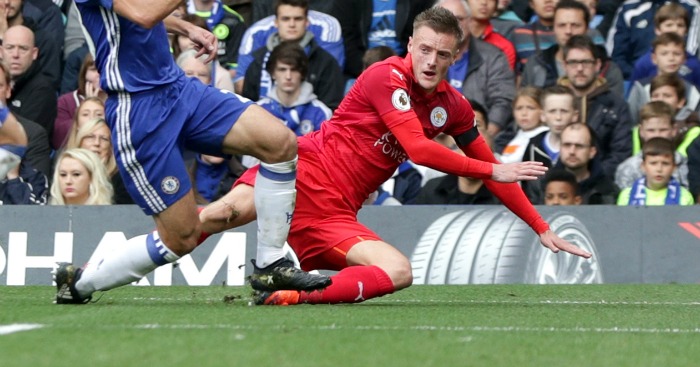 It’s hard not to wonder on Jamie Vardy’s behalf what might have been, an odd emotion given his rise through football’s tiers to the national team and Premier League glory. As N’Golo Kante was booed by Leicester supporters at Stamford Bridge for choosing to leave this summer, Vardy was cheered for staying. That decision looks more and more questionable with each passing week.

Vardy’s explanation for turning down a move to Arsenal was logical. The striker held fears about his lack of first-team action and suitability to Arsene Wenger’s preferred style of play, and Lucas Perez’s infrequent outings since arriving in England are evidence that those fears were hardly misguided.

Stan Collymore wrote a piece for the Daily Mirror in which he argued that Vardy would have started for England in the recent qualifiers had he moved, but the most obvious cause for potential regret is Vardy’s form for Leicester. Claudio Ranieri’s decision to prioritise the Champions League is understandable, but must be frustrating for a player like Vardy who is fuelled by Red Bull and hunger.

Against Chelsea, Ranieri chose to rest Riyad Mahrez and Islam Slimani for Tuesday’s home game against FC Copenhagen. Vardy was predictably starved of service and support, Ahmed Musa still struggling to settle in the Premier League. Vardy had one shot (not on target) and 27 touches of the ball, only four of which were in the penalty area. For the fourth straight away league game, Leicester were rotten. They have scored three times and conceded 13 on the road this season.

Not that Mahrez’s introduction with 25 minutes remaining had much effect on Vardy’s form. The partnership between Leicester City’s most creative player and top goalscorer from their title-winning season looks to have lost so much of its spark. Astonishingly, Monday marks exactly a month since Mahrez last found Vardy with a pass in the Premier League.

By almost every measure, Vardy’s start to this season has been bitterly disappointing. A momentary flash of raw pace and finishing gave Leicester the lead at home to Swansea in August, but that was the forlorn exception to the rule. During last season, Vardy managed a shot every 27.3 minutes, shot on target every 59.2 minutes and created a chance every 65.4 minutes. In Leicester’s first eight league games, the shots have come every 50.1 minutes, shots on target every 162.8 minutes (close to one every other game) and chances created every 108.5 minutes.

One statistic that has actually increased this season may go some way to explaining Vardy’s drought; the striker is actually completing more passes. With Slimani and Musa as strike partner, Vardy is less able to play the role of poacher, sat on the shoulder of the last man. The presence of Shinji Okazaki in the team last season gave Vardy a free ticket to avoid dropping deep. Okazaki’s role was one of self-sacrifice, and it was crucial to Leicester’s success.

It’s a line I’m going to be using regularly this season, but nothing can detract from the glory of Leicester’s 2015/16. It must be taken for what it was, a glorious, unfathomable achievement taken in isolation. Yet there is a strong ‘after the Lord Mayor’s show’ element to Leicester’s league season to date. A reliable defence has conceded four goals at Old Trafford and Anfield and three goals at Stamford Bridge. Last season’s top scorer is struggling to even manage a shot on goal.

You suspect Jamie Vardy is not a man who dwells too long on regret, but only he will know if he’s having second thoughts about not closing his Leicester fairytale after the perfect Hollywood ending. During a barren run of form, it’s hard not to peep over the fence to see how the green grass is growing.