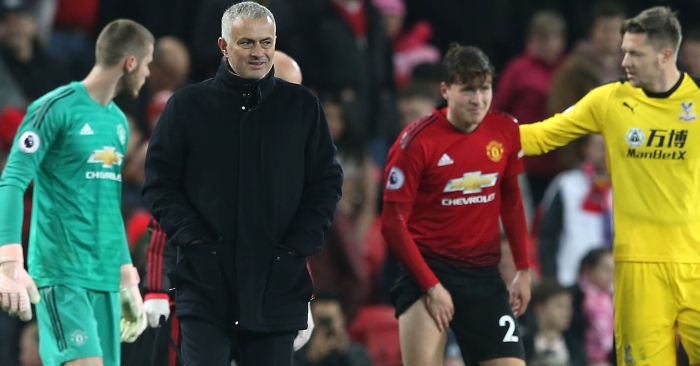 Jose Mourinho described it as “a bad point”. On the balance of play, Roy Hodgson may argue the same having watched his Crystal Palace side waste a couple of golden chances to earn their first win at Old Trafford in 29 years. The Eagles boss can at least take some heart from their display but for Mourinho, the reason for another Manchester United failure runs much deeper and is far harder to fix than simply extra finishing practise.

After his United players left the pitch to a meek backdrop of boos that reflected the apathy in their performance, Mourinho acknowledged United showed “not enough intensity, not enough desire”. It will no doubt be painted as the latest attempt by the manager to shift the blame for the Red Devils’ continued struggles from himself to any available scapegoat but, not for the first time, his sentiment rings true regardless of what you believe to be his motive.

No one but the players themselves can definitively state just how much they are giving for their manager and, more importantly, for their club. But when the manager joins the fans in doubting their appetite, then the question is a valid one. The answers and evidence, however circumstantial, in rebuttal are not even close to convincing.

🎙️ "I think there was not enough heart."

Jose Mourinho accused some of the Manchester United players of lacking heart in the draw against Crystal Palace. #mufc pic.twitter.com/BlY1ztW7F2

Of course there are some players with no case to answer. Unfortunately for Mourinho, those offering the greatest impression of commitment are generally the more limited technicians in his group. The current back four’s struggles this season are not for a lack of effort and that much-maligned rearguard can at least take some consolation from an all-too-rare clean sheet – just their second of the Premier League season. Victor Lindelof epitomised that unit’s determination by playing out the closing stages of this draw while his groin begged and screamed for mercy. Mourinho made a beeline for the vastly-improved centre-back at full-time to thank him for his effort shortly before publicly doubting that of the rest of his players.

Mourinho should not be criticised for going public with his frustration over his team not reflecting his drive. Too often when the manager has offered a forthright view on his team’s limitations, his critics have immediately focused on the courier rather than the message. If he holds such views on individuals and groups in his squad – he’s certainly not unique in his thinking – then why should the players be spared the public scrutiny?

“You’re a grown-ass man, deal with it,” said Romelu Lukaku when he was asked about Mourinho’s hard-line approach, but the struggling striker is almost certainly not speaking for his team-mates.

Those words followed similar comments in September when Lukaku was discussing his preference for the genuineness of Mourinho compared to some of his perma-positive contemporaries. But judging from how often some of his team-mates have gone running to their agent or the media in the face of a challenge from Mourinho, it seems blindingly obvious that the likes of Paul Pogba, Alexis Sanchez and Anthony Martial would prefer a boss more willing to sugar coat his feelings and spare them the inconvenience of accountability.

It seems Pogba would simply prefer any manager who doesn’t happen to be the Manchester United one. If his words aren’t painting a clear enough picture of his desire to move on again barely two and a half seasons after returning to the club as its record signing, then his performances certainly are.

Against Palace, Pogba was wretched. Again. A prodigious talent he may be but at what point is the 25-year-old going to earn the esteem he believes he deserves? Any Barcelona or Juventus scouts who have watched Pogba this season must have been hugely underwhelmed by the occasional glimmer of class interspersed between longer periods of anonymity and infuriating wastefulness.

Not his best display. pic.twitter.com/EQBojWv5k0

Pogba is by no means the only culprit but he is most certainly the poster boy for this squad’s indifference to their responsibilities. The player now stripped of the vice-captaincy admitted himself that his attitude and application was not befitting that of a Manchester United player.

It seems increasingly likely that the solution to the Pogba conundrum is to give him what he wants and allow him to move on to whichever club is willing to pay what his marketability is worth to Ed Woodward and his boardroom cronies. But what about the other under-performers?

Like every manager, Mourinho’s problem is that it is far too easy to change the manager rather than vast swathes of the squad. Of course, Mourinho is far from blameless in United’s current predicament. But it is far too simple to pin all the blame on the manager when, in fact, there is plenty to be spread around.

Perhaps it is also too easy also to condemn this or any squad for lacking application. After all, it is a catch-all accusation, something largely immeasurable, and one that is often made when knowledge or understanding of more complex root causes is absent. But supporters and managers are entitled to expect ‘pashun’ as the bare minimum return from their players. In that respect, too many United players are cheating Mourinho and the fans. When judgement time comes, as it most likely will at the end of the season, they along with the manager should be held responsible for United’s continued slide towards irrelevance.