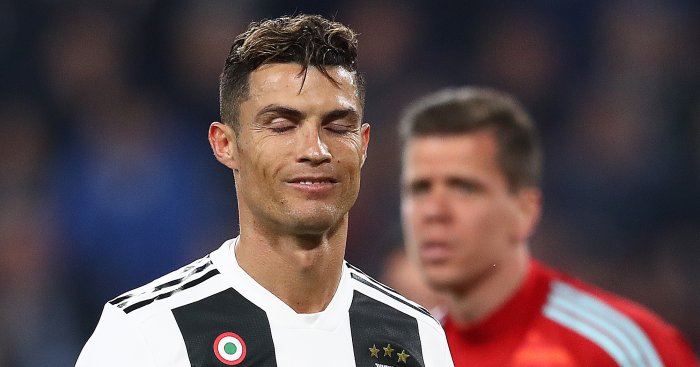 When Juventus spent £88million on Cristiano Ronaldo, it was with one purpose in mind. A third Champions League title and an end to the increasingly painful wait since the 1996 victory over, oh yeah, Ajax. Got to love a narrative.

Anyway. That was it. Big Cup or get out. Nothing else would do. It was a high-stakes gamble on a high-stakes prize, and it has ended in humiliation.

Juventus are transparently dignity-shreddingly desperate to win the Champions League. They don’t just want to win it, they need to win it. Domestic football doesn’t hold the attention too much when you are cruising to an eighth straight title.

This was the prize, the one they had come so close to winning in 2015 and 2017 when losing in the final and the one that now – despite the presence of the competition’s greatest ever player – looks further away than ever.

Of course, Juventus were always likely to fall short. Almost every team will. That’s how football competitions work.

But the manner of their exit, the limpness of the performance, and the identity of their opponents will make it particularly hard to bear.

It also highlights the obvious desperation of the Ronaldo signing. It’s not so much that it was a bad signing, just that it was a huge amount of money on something that was unlikely to actually work. One individual, even one who has won this tournament five times, one who would still be its 13th highest goalscorer even if only his goals from the quarter-finals, semis and finals were counted, cannot do it alone.

Juventus seemed to believe that he could, offering precious little else from any other source across two legs against an actual team.

Ronaldo was not to blame for the defeat; it was he who secured an undeserved draw in the first leg and he who did what he always does in Champions League knockout games and provided the goal that Juventus’ early play merited in Turin.

Both should have provided a catalyst for Juventus to go on and deal with Ajax and progress to an eminently winnable semi-final against either Spurs – who they mugged off so magnificently last season – or a Manchester City side whose self-defeating obsession with this particular title comes close to matching their own.

Instead, Ajax were soon level and spent the rest of the evening enjoying absolutely astonishing dominance. The scoreline could and should have been more brutal, only Wojciech Szczesny keeping things vaguely respectable. At least Juve, unlike Real Madrid, left with that small consolation.

It is cold comfort, though. Ronaldo cannot be considered a failure at Juventus by any sensible measure – indeed, the idea is laughable. He scored a hat-trick to dispatch an Atletico Madrid side feared across Europe for its defensive strength and then scored in both legs of the quarter-final. But he wasn’t brought to Turin at such staggering cost to be judged by sensible measures.

Juventus have learned what seems obvious. Even the most influential player the Champions League has ever seen is just that: one player. Football is still a team game, and in desperate pursuit of the one prize they crave, that lesson had been lost.

Ronaldo is not the silver bullet that could finally return the Champions League to Turin. He never was. He never could be.