It may seem churlish to focus on a negative after a breathless seven-goal thriller. But Jurgen Klopp surely will... 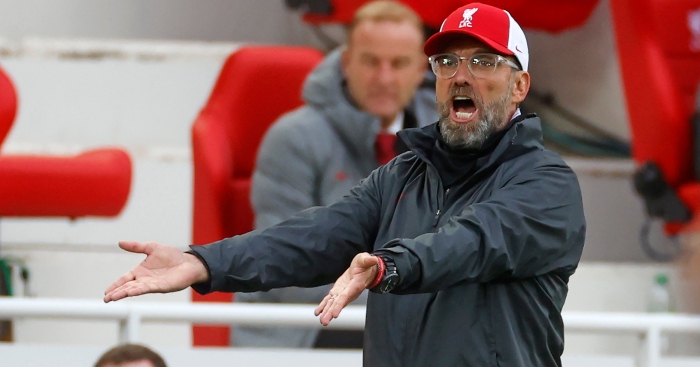 The highlight of the Premier League’s opening weekend did not disappoint. Liverpool and Leeds showcased more than enough quality to demonstrate why both sides begin a new season as defending champions but, thrillingly too, a calamitous approach to defending that will leave two coaches who prioritise entertaining the masses above almost all else with a bitter aftertaste, despite the punters being treated to a sensational Saturday evening show.

With Leeds, there was nothing to lose and everything for us to learn about Marcelo Bielsa’s Championship winners. It was no surprise that Bielsa refused to compromise on his attacking principles despite facing the most difficult start to life in the Premier League that he and his side could have been given. But few, even Bielsa perhaps, could be sure how Leeds would fare in taking the fight to last term’s runaway title victors.

Fortunately for Bielsa, Leeds were greeted at Anfield by Klopp’s spluttering post-Covid Reds, not the all-conquering machine whose performances before the lockdown rendered their lethargy after it almost inconsequential.

The only question that hung over Anfield as Klopp named his most-familiar XI was whether the champions could flick the switch to reignite that uncompromising relentlessness. Apparently, they could not and that must concern the manager as he reflects on another opening-day goal-fest on his watch.

‘Wow’ he mouthed as Klopp began to reflect upon Liverpool’s escape immediately after it had been confirmed by the whistle. The millions at home shared a similar sentiment, but for Klopp, the exclamation carried a different tone.

The hosts were sloppy all over the pitch. Even in attack, there were moments of wastefulness, highlighted by Roberto Firmino’s failure to take a gilt-edged chance moments before Leeds’ record signing Rodrigo inexplicably gave a reassuringly-sharp Mo Salah the opportunity to complete a match-winning hat-trick.

Liverpool’s midfield was too often bypassed with worrying ease by the speed and hustle of their visitors but Klopp’s greatest concern remains with his defence.

The Reds built their title challenge on rock-solid foundations last season but after sealing their first championship in 30 years, too often their defence caved in. On their way to the title, Klopp’s men conceded just 0.67 goals per game. During their post-lockdown victory lap, they shipped goals at 1.71 goals per game.

The mitigation there was motivation. Liverpool can hardly be blamed for letting their standards slip with the job done, especially while those standards had remained so consistently, almost unprecedentedly high when it mattered.

But Liverpool have evidently struggled to shake off that carelessness. Leeds left Anfield with three goals and they should have taken a point too, despite an xG of 0.3. Though their finishing was comfortingly impressive, United were allowed three different equalisers that were all easily preventable.

Jack Harrison’s strike rivalled Salah’s second for the goal of the game. A fabulous first touch only bettered by the second did for Trent Alexander-Arnold, who should have been bailed out by Joe Gomez. But the centre-back allowed Harrison to drift inside with alarming ease to slot inside Alisson’s near post.

Liverpool’s young duo could at least point to the fact that the senior presence in the home defence was even more guilty. Having headed Liverpool back in front for 2-1, Virgil van Dijk was far too casual in dealing with a long pass aimed in Patrick Bamford’s direction. Even for Leeds’ third equaliser, which came just as we feared the goals had dried up, Van Dijk was too easily bypassed by Helder Costa’s ball into Mateusz Klich.

Van Dijk won’t pay for his performance with his place, but Gomez might. With Joel Matip fit, the England centre-back will be fortunate not to start next Sunday’s trip to Chelsea on the bench, because Klopp surely cannot condone a continuation of his defence’s generosity, with title hostilities renewed.

Liverpool’s was not the only defence in disarray. Bielsa will leave Merseyside fretting over how he can shore up his rearguard having watched Robin Koch and Pascal Struijk link up like the strangers they are, though they won’t be alien to one another for long, and Liam Cooper is still to return.

Liverpool’s defenders, though, do not have unfamiliarity – or anything else – as an excuse.