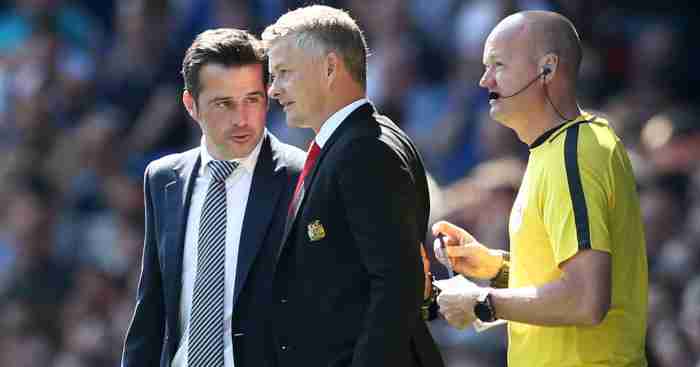 Ole Gunnar Solskjaer looks more like a caretaker manager now than he ever did when he officially held that title at Manchester United, but harsh as this sounds it is not a slight on him. This 4-0 defeat at Everton was his sixth loss in eight games, and raises questions about whether the club were right to make the decision to appoint him permanently midway through the season.

But Solskjaer is the latest in a line of newly appointed managers who show the problem at United isn’t just the man in the technical area. Perhaps, when it eventually comes to making their next change, they can learn a few things from Sunday’s opponents.

The aim for Solskjaer is to improve the quality and consistency of the performances amid a desperate search for points. They achieved neither of these things at Goodison Park in what was an embarrassing and damaging defeat in their quest to secure a place in the top four. With Manchester City up next at Old Trafford, things could get even worse.

United appear to be waiting for something or someone to come along and save them. Not so long ago this man was Solskjaer, but no more. On a number of occasions the job of saving them has literally fallen to arguably their one world class player, but even David de Gea was unable to stop the rot here.

And they should have seen it coming. Everton had scored from a Lucas Digne long throw aimed at Dominic Calvert-Lewin in their previous home game against an equally awful Arsenal. United were just as ill-prepared.

Richarlison was on hand to score acrobatically from the centre-forward’s knock-down, giving Everton the lead their early dominance deserved.

De Gea would have hoped to thwart Gylfi Sigurdsson’s effort from 25 yards, but the well-hit strike bounced as it approached the United goal to leave the Spaniard stranded.

More worrying was the space afforded to the Icelander as he latched onto Idrissa Gueye’s pass as Everton broke. But while De Gea not saving a shot from distance was a rarity until recently, space for opposition forwards has become all too common.

Digne was similarly alone just outside the area before drilling in Everton’s third. De Gea cleared the ball following a corner, but the next place he saw it was in the back of his net. Theo Walcott added a fourth despite a poor touch from Sigurdsson’s pass, nudging his shot past the onrushing keeper.

Some of the visitors’ play drew ironic cheers from the home fans. Passes went astray, players slipped on the Goodison turf, and there was a general air of disorganisation in the United ranks.

Everton have been far from consistent themselves this season, with club captain Phil Jagielka commenting on the similarities between the two sides in his pre-match notes. “United have had a strange season in the same ways,” he said.

But even in defeat it has been easier to pinpoint where things have gone wrong in an Everton performance, as each player has a defined role and their aims as a team can be seen under Marco Silva.

Seamus Coleman: “It's really come together. When the atmosphere’s like that at Goodison it’s a very tough place to come. "I’ve never doubted Marco Silva throughout the season. It’s always going to take time to stamp his own style on the team." #EFC #EVEMUN pic.twitter.com/MIfx26XAtP

Even in victory the same can’t be said for United who always look like they’ve been sent out with the freedom to play their own game. The problem being the players aren’t entirely sure what that is, and some appear not to really care.

The appointment of Marcel Brands as director of football at the beginning of the season helped Everton and Silva. They target roles, positions, and specialists. United target targets and then work out what to do with them later. They have mastered the first aspect, but all too often fail in the second.

Many of the players who are working out have come from their academy, while big-money signings are regularly underperforming. Scott McTominay, Jesse Lingard, and Marcus Rashford look like the players they could build a team around, but it will be yet another rebuild.

This was an embarrassing afternoon on Merseyside. Sigurdsson’s control of the game was such that he even had the audacity to shoot from a corner, and would have scored were it not for the last-second reflexes of De Gea who cleared off the line.

Picking out Everton’s star performers would mean listing their entire team, but you’d struggle to name the United line-up even after watching them for 90 minutes, such was the anonymity of some players.

Rashford fired over a couple of times in the first half, and shot well wide to Evertonian cheers in the second. Anthony Martial’s name was on the team-sheet, and that was pretty much all he achieved before a late strike troubled Jordan Pickford as United’s first shot on target. Former Toffee Romelu Lukaku was outmuscled and outplayed by Kurt Zouma and Michael Keane.

Can United learn anything from this defeat? They could probably learn a few things from Everton as a club, even though Silva’s side still have work to do – as indicated by their place in the table and goal difference of just +6 despite Sunday’s four-goal haul.

The United fans sang Solskjaer’s name, indicating that the changes they want lie elsewhere, too.

The Norwegian himself bemoaned his side’s inability to get the simple things right. “That performance is difficult to describe, because it’s so bad,” he said. “They beat us on all the basics.”

But United’s troubles run deeper than basics, and the changes needed might be complicated and difficult to make. Almost five years to the day after David Moyes was sacked following a defeat to Everton, the same changes still need making. With that said, sacking another manager would be even more embarrassing than this result.