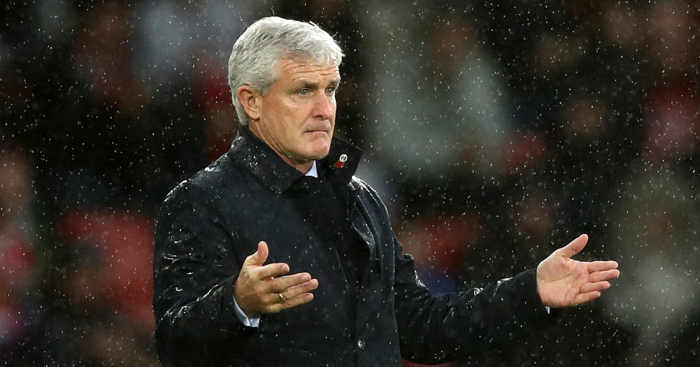 As someone who infamously stated just last December that “I don’t do relegation”, Mark Hughes is not the sort of manager who believes in tempting fate. “I’ve never been relegated because I’m too busy trying to get in top 10s,” he said 11 months ago, with his Stoke side struggling in 15th. “I’ve never been near it so I’m not going to start now, am I?”

Within three weeks, he was sacked, the Potters having fell to 18th. The Welshman, who oversaw the worst Premier League start in history at QPR in 2012, has carved out quite the niche of being pushed from a sinking ship before it finally settles at the bottom. He might not “do relegation”, but the clubs he manages have a curious tendency to.

Quite how Hughes emerged from last season with his reputation enhanced is a mystery. He managed 30 games over his two spells at Stoke and Southampton, winning seven, earning 28 points and scoring 31 goals. He guided Saints to safety by winning eight points from as many games, taking them from the depths of 17th to the heady heights of 17th.

There is no sympathy for a club who now find themselves in the exact same position after 12 games of this season. To reward Hughes for mediocrity with a three-year deal was a grossly negligent decision from a club that has lost its way.

Reports before the game against Watford suggested Hughes would be sacked if Southampton failed to secure just a second home win in 12 months. Manolo Gabbiadini’s goal put them on track, but Jose Holebas’ deflected effort leaves the club in limbo. To draw with the team in seventh is not quite bad enough to prompt action, nor should it be good enough to save him.

Full list of teams Southampton have beaten at home in all competitions in the last NINETEEN months:

This was Southampton’s problem last season. It was not until March when they finally felt forced to act. Mauricio Pellegrino’s greatest trick was to be in permanent danger of drowning before coming up to catch his breath at the last minute. Saints never dropped lower than 18th under his management, and were in the relegation zone for just three weeks out of 30 before he was removed.

This season, Southampton have drawn two more games than any other side, and no club has less than their one victory. They are level on points with a Cardiff outfit who have absolutely no right to claim level footing with such an established club.

If Southampton are to be accused of sleepwalking towards relegation yet again, they have the perfect manager for the job. The hosts had just four shots on target, and the lack of a discernible game plan continues to count against them. Even the atmosphere at St Mary’s was striking in its indifference towards a supposedly troubled manager, with Watford’s travelling fans louder than an understandably disgruntled home support.

Hughes could feel hard done by. Charlie Austin’s perfectly legitimate second-half goal when 1-0 up was ruled out for offside, but Maya Yoshida had not interfered with play. The Welshman has never needed an excuse to blame the officials for his own mistakes; this gives him the ammunition anyway.

Yet Watford were hoist by that same petard. Nathaniel Chalobah should have been awarded a penalty when fouled by Ryan Bertrand in the first half. If Hughes is to accept that luck was part of the job, he cannot point to later misfortune as a reason for failure.

It remains to be seen whether Southampton deem a draw sufficient in terms of Hughes’ position. If so, they are greeting mediocrity like an old, underwhelming friend. The Welshman has won seven of his last 40 Premier League games, and four of his last 19 at home. This is not a blip, but a long and alarming slide.

Southampton must therefore be tempted to act now before it’s too late. They navigated that precarious tightrope last season, and cannot afford to try again. If they do remove Hughes before 2018 is out, he will become the first manager to be sacked by two Premier League clubs in a single calendar year. For a boss who doesn’t “do relegation”, that would take some explaining.

If you enjoyed this, feel free to give us and our very own John Nicholson some love in the FSF awards. Head here to vote…