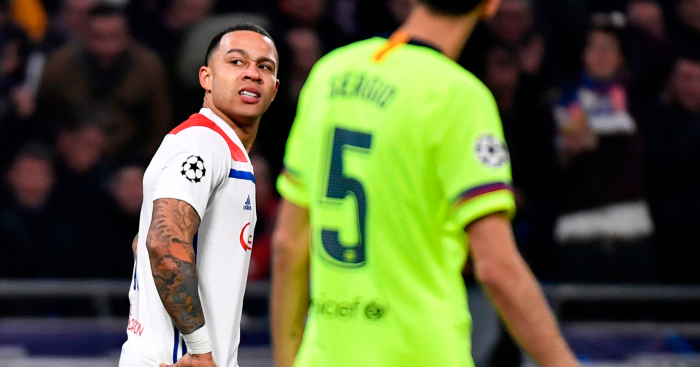 If Memphis Depay was not on top of the world, he was certainly looking down and laughing at the fallen world champions. As his Panenka penalty looped over Hugo Lloris and into the France goal, the 25-year-old strolled away from the scene of the crime and ensured everyone knew he was the perpetrator.

De Kuip erupted and Netherlands had condemned Germany to a UEFA Nations League relegation celebrated far and wide. Depay basked in the moment. And so he should: he has not scored in 17 games for club and country since.

His latest failure to find the net would ordinarily be the least noteworthy. Barcelona are the most difficult opponent he has faced since that goal in November. But Depay was sent tumbling from a pedestal he had built entirely for himself on Tuesday.

“I want a new transfer to a top-level club this summer,” he said at the end of last month. “Lyon is a big club but it’s not one of the five best in Europe. I want to go to a club like Real Madrid, Barcelona, Chelsea, Manchester City, Paris Saint-Germain or Bayern Munich.”

The player clearly felt he had outgrown the club who gave him a chance when he fell flat on his face while exiting Old Trafford. Depay deserves great credit for scoring 33 goals in 91 games for Lyon since joining in January 2017, but Lyon’s gamble on a forward who had scored seven goals in 53 games in England made it possible.

Not that Depay ‘owes’ Lyon anything, nor vice versa. Loyalty in football is a two-way street, and a club cannot demand total allegiance from a player they would happily sell or drop if the circumstances suited them. It is a mutual relationship where no party truly holds the majority power.

But in outlining his mid-season wishes to move to “a top-level club”, Depay made a rod to perfectly accompany his back tattoo. His display against Barcelona was only the latest example of a player struggling under the weight of self-expectation.

He had one shot and created one chance in 90 minutes. No starter for either side registered a lower pass accuracy (77.1%). He won possession just once and lost it on 17 occasions. It was a comprehensive lesson in how to be wasteful in a game and against an opponent where Lyon could not afford such recklessness.

Some great performers for Lyon tonight. Memphis Depay is not one of them.

The absence of Nabil Fekir afforded Depay with the stage he so craved, but he stumbled over his words when placed under the spotlight. Playing alongside Moussa Dembele, the Dutchman was given license to attack Nelson Semedo. The right-back has only recently settled at Barcelona after an initial struggle following his summer 2017 arrival, but found no difficulty in silencing his rival.

Had Lyon been dominated in every position, then such inefficiency would be forgivable. But Ferland Mendy and Tanguy Ndombele rose to the grand occasion while Depay wilted. His ability to talk the talk knows no bounds, but he is too busy trying to sprint before he can walk the walk.

Depay has had his moments at the peak of the football mountain, but they are few and far between. If Barca were one of the six “top-level clubs” he is courting, this was his chance to put himself in the shop window. He succeeded only in knocking the price down.