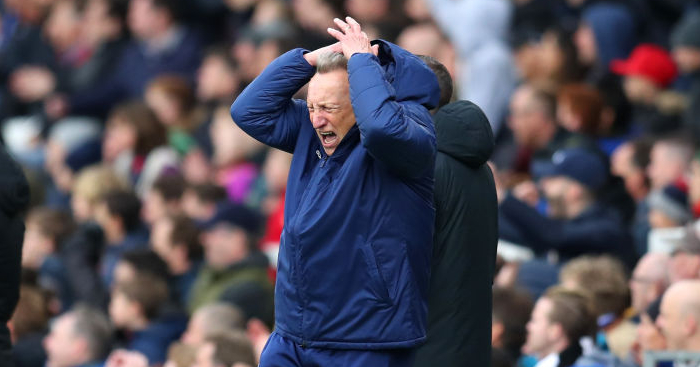 Neil Warnock might have done the maths. He could have justifiably predicted that Brighton would not earn another point from their final three games, and that four more for Cardiff would therefore have secured Premier League survival.

That really is the only explanation for the otherwise inexplicable decision to play for a draw away at Fulham. But then the Cottagers had the 18th-worst home record in the Premier League, with Cardiff hosting the top flight’s sixth-best away side (Crystal Palace) and visiting the sixth-best home side (Manchester United) in their final two games. Quite how he expected the other victory to come about is anyone’s guess.

One thing is for certain: Warnock’s gamble has left Cardiff needing at least four points from a possible six to secure safety, and even that will likely not be enough. The miracle worker in dragging them this far became the miracle shirker at Craven Cottage.

There can be no blame laid at the whistle of the officials this time. Referee Chris Kavanagh did not instruct Cardiff to play bafflingly defensively until the final five minutes, assistants Daniel Cook and Marc Perry were not to blame for keeping Oumar Niasse on around an hour too long, and fourth official Michael Oliver bears no responsibility for chasing a result by bringing Rhys Healey on for his third appearance of the season before second-top scorer Bobby Reid.

This had nothing to do with a league-wide conspiracy, nor a debatable penalty decision or red card. It was a simple case of gross mismanagement from a 70-year-old who dug himself a hole entirely too deep to climb out of.

Either go for it and get relegated trying your heart out.

Or sit back, hope to nick a draw and rely on Newcastle getting a result away from home.

Can’t believe Warnock chose to do the second option.

And how Cardiff tried to climb. They had three shots – only one of which was on target – from the first minute to the 80th, then 10 shots – seven on target – in the final ten minutes. But that late flurry was a direct response to Ryan Babel’s glorious goal in the 79th minute, by which point the damage was irrevocably done.

Fulham – relegated, with nothing to play for and managed by someone 58 days into the job, played with a purpose, a direction an, aim. Cardiff, with survival on the line, were told to do the exact opposite. They were not pushed onto the back foot with 27% possession; they positively embraced inferiority.

That is the problem with Warnock’s incessant underdog act. It has been one of the key facets behind such an impossible rise, to instil a siege mentality, but it is a difficult thing to reverse. Cardiff needed to assert themselves more, yet these players have been told to do the exact opposite for the last nine months, if not longer.

Even after the game Warnock couldn’t resist keeping up abrasive appearances. “There’s a lot of money on that team sheet,” he said of the opposition, yet Cardiff beat this exact same Fulham side in October, and gave their two most expensive players in Josh Murphy and Reid a combined three minutes to change the course of this game.

The cost of Fulham’s starting line-up was irrelevant, and relying on results elsewhere was ignorant. Cardiff now find themselves in an utterly avoidable mess.

Warnock took a side from 23rd in the Championship to promotion, then gave them a fighting Premier League chance. But he undid nine months of hard work in 80 lifeless minutes on Saturday. Their impending relegation is as much down to him as anyone.