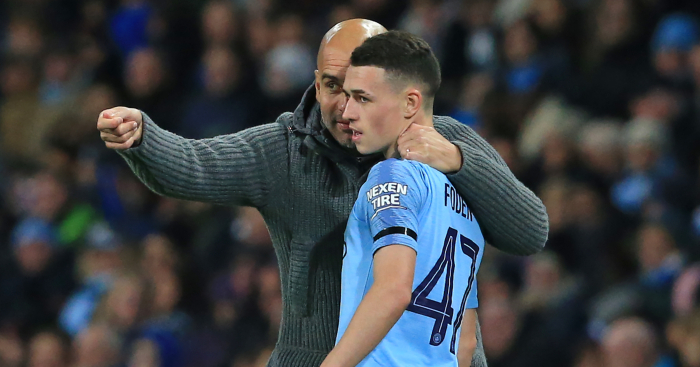 Those tasked with ‘learning’ five things from Manchester City’s Community Shield win over Chelsea in August pretty much all wrote the words ‘Phil Foden‘ next to the 1) on their laptops. Most drew favourable comparisons with Chelsea’s curiously pedestrian midfielder Jorginho, who had been chased but then lost by City in the summer transfer window. Here was the proof that actually, City did not need an expensive signing from Napoli; they had their boy.

‘He is an exceptional talent. Let us just hope he plays often enough. If he does he will be in the England team also,’ wrote Jason Burt in the Daily Telegraph. Those who went further and suggested that City’s failure to sign a central midfielder would mean plentiful opportunities for the precocious 18-year-old were guilty of being naive – City had just won the Premier League in record-breaking style and all those players remained at the club. Not only did they remain, but it was already clear in August that Bernardo Silva was now an exceptional player. It seemed that Pep Guardiola already had a ready-made replacement for the crocked Kevin de Bruyne, and it was not Stockport’s very own Andres Iniesta.

It’s also important to remember that Guardiola does not owe England or its youngsters anything at all. It’s not his job to help England, even if his work with Kyle Walker, John Stones and Raheem Sterling make that a very welcome consequence. His remit begins and ends with Manchester City. But part of that remit is to protect the club’s assets, and it is clear that Foden – whether his future ultimately lies with City or not – is an incredibly valuable asset. And this is absolutely not the right time to frustrate that asset.

This is a time when the England manager is embracing youth like no other. And a time when Foden is staring at what is happening on the greener grass of Dortmund for Jadon Sancho, who has played almost three times as much club football this season than his fellow City Academy graduate. It has earned him England caps and it may well force Christian Pulisic towards these shores. Guardiola is presumably urging Foden to be patient, but there is a massive, flashing yellow ‘but’ in Germany that can be seen all the way from England.

“We will do our best, because Phil is ready,” said Guardiola in September. And then on Monday he faced the press ahead of Tuesday’s Lyon clash and repeated: “I said from the beginning he is ready, definitely ready.” And yet, when it came to writing out a City team robbed of several midfielders, Guardiola hesitated over the name of his ‘gift’ and instead opted to play Raheem Sterling out of position. “I decided for another player,” said Guardiola. Ouch. But if not now, then when?