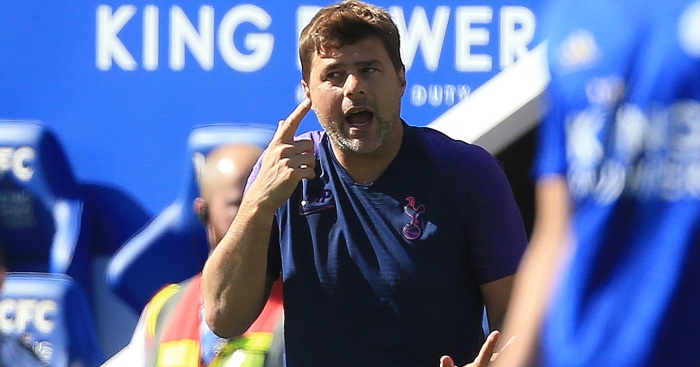 Only the utterly joyless or Arsenal fans would feel absolutely no sympathy for Tottenham at the King Power Stadium. Having gone toe-to-toe with Brendan Rodgers’ upstarts for just over an hour, it appeared that Spurs had gone a long way to securing three precious points and an alarmingly-rare away win when Serge Aurier drilled a second goal beyond Kasper Schmeichel.

But having shown itself in its best light in the first half to chalk off Wilfried Ndidi’s opener, VAR crashed Mauricio Pochettino’s party, ruling that Heung-min Son was a cat’s c*ck hair offside in receiving a through-ball two passes before Aurier’s fine finish. No one called for it during play and it was only ruled offside by the tiniest of margins after going under a microscope that many reckon not to be as accurate as it needs to be in these instances.

Wow… It's doesn't get much closer 👀

Serge Aurier has a goal ruled out as Son was fractionally offside in the build-up.

It was another punch in the gut for football supporters of any creed already fed up of VAR’s incessant nit-picking. But for Spurs, it seemed like a knockout blow. From celebrating a two-goal cushion, within five minutes they had relinquished yet another lead before passing over the points entirely to their grateful hosts.

On the road, it seems now that this is a habit so deeply ingrained, you wonder how Mauricio Pochettino is ever going to tease Tottenham out of it. The Spurs boss doesn’t appear bothered about hiding the fact that he hasn’t got the remedy and even more worryingly, his demeanour sometimes suggests he’s losing the will to keep searching.

This surrender wasn’t as meek as some of Spurs’ classic capitulations. But again, individual mistakes conspired to cost them a first three-point haul on the road since January. Since betting Fulham eight months and a day ago, Pochettino has seen his side lose seven and draw two of their last nine Premier League away matches.

That travel sickness continued in Europe on Wednesday night when they gave up a two-goal lead to draw with Olympiacos when the performance was every bit as worrying as the result. The same six-year-old mistakes that prompted six changes from Pochettino, but whatever the Spurs boss does differently, at the moment, he keeps getting the same results.

Pochettino sent on Victor Wanyama perhaps to preserve Moussa Sissoko from a second yellow card but typically of the manager’s luck lately, it was his substitute who gave the ball away within five minutes to allow Leicester to build towards an equaliser. Wanyama’s short pass aimed in the general direction of Harry Kane was cut out by the hugely impressive Caglar Soyuncu, though Spurs still had eight white shirts behind the ball. Half of those were caught the wrong side by James Maddison’s simple 12-yard push all the while both Spurs centre-backs dropped off to allow Harvey Barnes the time and space to turn and feed Jamie Vardy. From that point, Spurs best form of defence was the power of prayer.

3 – Tottenham have failed to win three consecutive away Premier League games when they were leading at half-time for the first time since March 2008. VAR. pic.twitter.com/WHYFfRwQ22

For Pochettino’s sanity, it is hoped that his faith in whichever God he prays to remains stronger than the trust he holds for many of his players right now. The Spurs boss signalled further discontent on Friday when he said that he remains unsure whether this squad is as strong as last season’s despite the arrival of three top targets coupled with the exit of only two players, both of whom he was delighted to cut loose. If Spurs have gone backwards, it can only be in their minds.

That is where Rodgers was looking for improvement from Leicester following last weekend’s defeat at depleted Manchester United. The Foxes are much-fancied but burdened with little expectation for now, similar to how Spurs have spent a vast swathe of Pochettino’s reign. Once more, Rodgers might feel that Leicester didn’t really grab the initiative until they were invited to by VAR. But when they did, once again, Spurs buckled with alarming ease.

Pochettino might reasonably have expected that consistent top-four finishes and a Champions League final place would rid his side of their ‘Spursy’ tag. But there has to be more to their away form this year than bad luck and worse defending and Tottenham can no longer rely on their youth and inexperience as a shield from the flak.