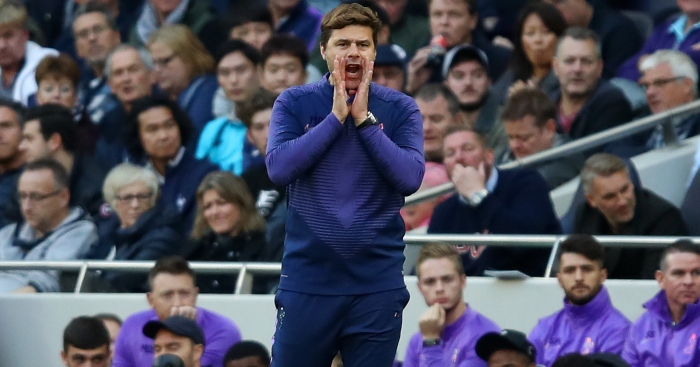 In theory, it was just what Tottenham needed. A home clash with the Premier League’s bottom side was viewed as the perfect opportunity to right some of the wrongs that saw Mauricio Pochettino’s side suffer four defeats in five games and concede 10 goals in their last two outings.

Indeed, prior to heading to the Tottenham Hotspur Stadium, Watford had won only one of their 12 Premier League matches against Spurs and in the last 33 months, the Hornets have been beaten in 16 consecutive trips to big six opposition.

But, lads, it’s Spurs. It’s this Spurs, a broken team bereft of confidence and character. It’s hard to know how much further their spirit could have dropped had Watford held on for the final five minutes and earned their first win of the season at the ninth time of asking.

Dele Alli’s goal, itself a farce because of VAR confusion, won’t sprinkle any glitter on another turd of a performance from Spurs. Upon being offered the chance to bite back at some of the criticism hurled their way over the last fortnight – the vast majority of it fair – the hosts retreated into their shell and hid again.

Pochettino deprived some of his players the opportunity to swerve the spotlight, with pre-match rumours of a vastly changed defence proving unfounded. It was thought that Spurs might bench many of the stars we know want away but instead, Pochettino played all of Jan Vertonghen, Toby Alderweireld, Serge Aurier and Danny Rose. Rather than making sweeping changes to the make-up of his defence, he altered the shape of it to a three-man unit.

Six minutes is all it took to pierce that statuesque rearguard. Rose was beaten too easily by a single long pass and Abdoulaye Doucoure capitalised on a failure to react by all three centre-backs to roll in an opener. You might think that going behind would provoke Spurs to shake off their lethargy, but then you would expect that too in the wake of being humped by Bayern. When the half-time whistle blew to a chorus of boos, Spurs supporters were left wondering if a reaction of any sort might ever come.

2 – Tottenham Hotspur have conceded inside the opening 10 minutes in two consecutive Premier League games for the first time since November 2014. Slow.

Pochettino’s response was a half-time substitution and yet another mid-game formation tweak. Davinson Sanchez was hooked upon Son Heung-min’s entrance and Spurs went to 4-2-3-1 with the South Korean injecting some energy into his listless side. That facilitated a 70 per cent share of the possession for Spurs but creativity was in far shorter supply. Both sides had only two shots on target each while Spurs’ aim was off on another three occasions. Aside from the trip to Manchester City in August, it was the lowest number of shots Spurs mustered in any game this season and the fourth time this term they have failed to create a big chance.

Their equaliser was the result of a Watford error. Ben Foster boobed while mopping up a loose ball, allowing Dele Alli the opportunity to control and finish on his first start of the season. The VAR farce that followed meant Spurs supporters couldn’t even savour properly that one moment of respite.

It was not the only VAR failure of the afternoon, but Spurs were somehow the beneficiaries in the first-half when the officials at Stockley Park backed Chris Kavanagh’s decision not to award Watford a penalty after Gerard Deulofeu was brought down by Vertonghen. How clear and obvious must ‘clear and obvious’ be?

With that in mind, Pochettino should be thankful for a point that before kick-off would not have been an acceptable outcome. Where does the Spurs manager go next? Back to White Hart Lane on Tuesday when Red Star Belgrade arrive in north London looking to heap more misery upon their hosts. For that must-win Champions League fixture, yet more changes are inevitable since the only players who did themselves justice were those introduced from the bench.

Spurs were opened up at will by the Premier League’s joint-worst attack and they struggled to break down the division’s joint-worst defence. Pochettino was already short on solutions but his problems are only increasing.