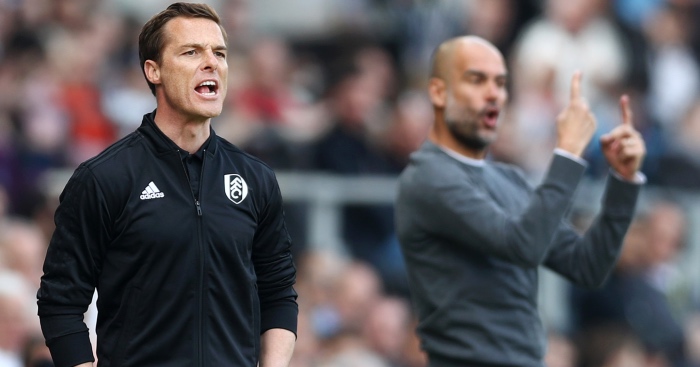 Scott Parker seems most likely to get the Fulham manager’s job, despite the former midfielder failing to arrest the club’s slide back towards the Championship. The run of fixtures he has faced offers some mitigation and, regardless,  Sir Alex Ferguson assisted by Brian Clough would struggle to keep the Cottagers up while they insist on shooting themselves in the foot.

Manchester City, the Premier League’s most deadly attack, hardly needed a helping hand on Saturday lunchtime but Fulham, the division’s worst defence and most accommodating hosts, were happy to extend more than one.

To ensure the visitors felt at ease at Craven Cottage, Fulham offered up the ball in their own defensive third on five occasions in the first half. Timothy Fosu-Mensah was the first of the hosts to be so generous, playing a brainless square pass which was seized upon by Kevin de Bruyne before Bernardo Silva drilled home a fifth-minute opener.

12 – Fulham are the first English top-flight side to concede at least twice in 12 consecutive league games since Newcastle between May-October 1977 (14 games). Consistency. #FULMCI

Fulham continued to play into City’s hands, with the only surprise being that the champions took so long to notch their second. This time it was Joe Bryan’s brain fart which presented possession for goalscorer Silva. Again, Fulham had numbers back, but it took Sergio Aguero just three touches to break beyond Parker’s ropey rearguard and dink the ball over an equally-ropey Sergio Rico in goal.

Bryan’s poor distribution was the most glaring mistake, but his was preceded by Tom Cairney and Ryan Sessegnon passing both ball and buck. Cairney played it backwards to Bryan when he had time and space to make progress up the left flank. Ahead of him, Sessegnon had almost a whole City half that he refused to run into, and rather than turn City’s defence, Fulham skipper Cairney opted for a pass that reeked of the cowardice the Cottagers have shown all season.

Whether it be Parker, Claudio Ranieri, Slavisa Jokanovic or anyone else patrolling the touchline, a coach can only be blamed so far for such foolish mistakes. At the top level, a certain amount of individual technical and mental aptitude is expected, regardless of what shape or formation the collective takes. In Fulham’s case, no team in Europe’s top five leagues this season have committed more errors leading to the concession of a goal.

While Parker might be exasperated at his players’ proneness to mistakes, he can help minimise the effect of them. During the first half, it seemed like Fulham had been told to go toe-to-toe with City’s high press in the hope of playing through it. The absence of Aleksandar Mitrovic may have scuppered any plot to be more direct between back and front, but the Plan B was doomed to fail and played a part in City having the most attempts at goal of anyone in the first half of a Premier League game this season.

Someone, presumably Parker, got the message through at half-time because Fulham were far more risk averse in the second half. Long before then, though, the mission was one of damage limitation, which City’s wastefulness certainly aided.

Kyle Walker's efforts means that every single outfield player that started for Man City vs. Fulham managed at least one shot.

The same is true of Fulham’s season. The Cottagers’ fate and an immediate return to the Championship seemed to be accepted before Parker took the reins, with the caretaker boss told not to spearhead a survival mission, rather “stabilise, grow and rediscover ourselves as a football club”. It’s a subjective goal, probably not one that can be achieved in a 10-game job interview, and certainly not in the month he has had at the helm during which time Fulham have faced the top two, Chelsea and Leicester.

The tests come a little easier in the coming six weeks when more tangible improvement will be expected from Parker’s players. The bar has been set so low that just taking a step forward without tripping over or aiming a gun at their own feet would be a positive start.