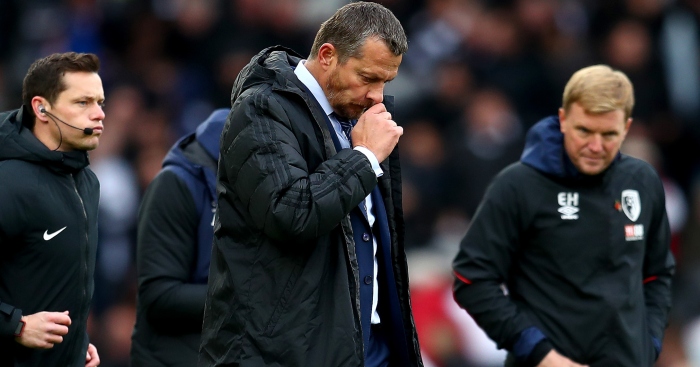 “As for the sensational and fictional headlines related to Slavisa this week, I’m equal parts amused, astonished and disappointed. I ask you not to believe everything you read. Or, in this case, don’t believe anything you read.”

Fulham owner Shahid Khan was defiant in his programme notes ahead of the visit of Bournemouth in response to reports that Slavisa Jokanovic had been given two games to save his job. But however reassured the Cottagers boss may have been following Khan’s show of support, another resounding loss must have the manager fretting.

A 3-0 home defeat to the sixth-placed Cherries leaves Fulham in the bottom three after a fifth defeat in six Premier League matches. It was by no means a one-sided affair at Craven Cottage, with the hosts edging the possession stats and matching Bournemouth for shots on goal and corners. But Eddie Howe’s side offered the ruthlessness and resilience at the key moments that Fulham have yet to demonstrate that they possess.

It is a familiar story for Cottagers fans who have seen their side ship 15 goals in the last four outings. The heaviest defeat, a 5-1 home reverse to Arsenal, still offered some encouragement in terms of performance but today and last weekend’s 4-2 loss at Cardiff highlight Jokanovic’s biggest worries.

If Fulham continue conceding at the rate they have through their opening 10 games – the joint-most in Premier League history – they will finish with 106 in the goals against column. Jokanovic’s side have let in five goals more than any other side and that, combined with the toothlessness on display against the unblemished Cherries, is not sustainable for any side with realistic hopes of staying up.

Jokanovic tried to bolster his rearguard by dropping recent England call-up Marcus Bettinelli and handing a Premier League debut to summer signing Sergio Rico. The goalkeeper on loan from Sevilla barely put a foot wrong but he was powerless to effect the recklessness in front of him.

Fulham’s problems were largely of their own making. Timothy Fosu-Mensah ruined his side’s good work in the early stages by giving away a penalty for a clumsy challenge on Callum Wilson, who duly converted the spot-kick; Jean Michael Seri’s giveaway was punished by another Cherries goal; while Kevin McDonald’s second caution came as a consequence of sloppy play from Denis Odoi. Aboubakar Kamara, who was wretched throughout, would have followed McDonald down the tunnel almost immediately had he not been shown leniency after kicking the ball away while on a booking.

Such fecklessness hints that Tim Ream had a point this week when he suggested Fulham have got an attitude problem. “Do we really have the fight? Do we have the grit? Do we have the determination?” last year’s player of the season asked. “At this moment in time, I would say, ‘No.’

“There are not enough guys who want it. Who want to fight for each other, for themselves, for the club.”

Jokanovic suggested Ream’s words had been taken somewhat out of context but this was hardly a case of poor translation. It is a damning verdict on the dressing room Jokanovic presides over and results offer tangible proof of Ream’s concerns.

All is not lost, however. Jokanovic has developed a philosophy and a style of play at Fulham that deserves time. He was granted exactly that last season after a similarly slow start and patience most definitely paid.

Khan made that same point: “Optimism also comes naturally knowing we have a head coach in Jokanovic who not only understands and appreciates the honour of representing Fulham, but also the past two seasons has found the right formula with his personnel to hit our stride in time for the holidays and a strong run in the second half of the campaign.

“That should give all of us comfort ahead of the international break next month, especially given it was at that point last season when we began our climb in the table toward eventual promotion.”

Jokanovic cannot be thinking beyond the next two fixtures before that break. A trip to Huddersfield next Monday night could see the Premier League’s bottom-placed side leapfrog the Cottagers before an even more daunting trip to Liverpool the following Sunday.

“I must be brave and keep going and encourage my team,” Jokanovic said after “a very hard defeat”. The manager is grateful to have a supportive owner and a strong body of work to fall back on. But that faith isn’t limitless, especially if improvement is not swift and dramatic.