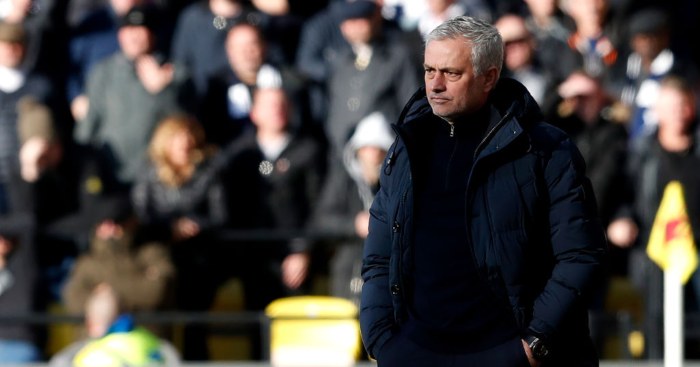 Jose Mourinho can barely move for midfielders at White Hart Lane yet none of them seem capable of forming a functioning partnership for Tottenham.

It’s a situation similar to Mikel Arteta and his plentiful supply of shaky centre-backs, but at least that only hurts the Gunners going one way. The base of Mourinho’s midfield is exposing his defence and suffocating his attack.

The Spurs manager opted for Harry Winks and Giovani Lo Celso to operate in his engine room at Watford but the pair, much like Mourinho’s other partnerships, could not get the visitors going. Winks and Lo Celso spent most of the goalless stalemate boxed in by Watford’s Etienne Capoue, Nathaniel Chalobah and Abdoulaye Doucoure and it won’t have been lost on the visiting boss that the Hornets’ core looked more like a Mourinho midfield than Mourinho’s has during the early days of his Tottenham reign.

No one can accuse Mourinho of not trying to find an adequate midfield blend. He’s tried plenty and if he had his way, it would perhaps be Eric Dier – or a Dier type, at least – and Moussa Sissoko in the middle of the park for Spurs.

Sissoko is sidelined and Dier was on the bench at Vicarage Road while Mourinho susses out whether the England international will ever get back to the form, seemingly taken from him by injury and illness, that made him Gareth Southgate’s first choice.

Winks, another of Southgate’s recent fancies, completed 90 minutes consecutively for the first time since September which suggests Mourinho hasn’t completely dismissed the 23-year-old, which it appeared he had following a hopelessly passive performance in the defeat at Manchester United in December. But if the manager is waiting to be convinced, he will need the patience we all know Mourinho doesn’t possess.

Winks, as you might expect played lots of tidy passes at Vicarage Road, 36 more than any Watford player in fact. But not one of them hurt the Hornets. And it is not as if they didn’t sit off and allow Winks to play.

The hosts were surprisingly accommodating in the first half when it was thought that they would channel the confidence gained from four wins out of five into harassing a fragile Spurs side into submission. But Nigel Pearson instructed his troops to retreat and allow Spurs to come on to them with two factors in mind. Firstly, without Harry Kane, this Spurs attack is all fart, no poo. Secondly, with Serge Aurier almost playing as a right winger, the Hornets were looking for opportunities to break at a pedestrian defence screened by a pair with barely a defensive instinct between them.

Spurs welcomed the possession but did nothing with it. Winks tried to vary things, playing 10 long passes with only five finding their target. And there was always a target wide left, where Son Heung-min was persistently left one on one against Adam Masina. But his range of passing is the limit of Winks’ variety.

At least Lo Celso can penetrate by carrying the ball through the lines. But the Argentina playmaker looks lost in a more intricate deeper role, especially while Dele Alli enjoys the absence of scrutiny as a no.10.

In the second half, Watford adopted a position on the front foot and for half an hour, Winks and Lo Celso were chasing Doucoure’s shadow as he persistently ran beyond them on his way into the box. The Spurs pair have had no time to understand what a screening partnership might look like let alone work on it, but there is nothing to stop either getting a foot in occasionally. Winks made one tackle in 90 minutes, Lo Celso two. Their Watford counterparts, Chalobah and Capoue made 10 between them. Indeed, beyond the back four, Spurs’ six players made a total of six tackles. Gerard Deulofeu managed as many on his own.

Of course, tackling is not the primary function of Spurs’ attack but neither is it operating in an attacking sense either. Today, in Kane’s absence, Alli, Son, Erik Lamela and Lucas Moura were direct but heading in different directions. Without Kane leading the charge, or a quality centre-forward addition this month, it is hard to envisage a decisive end to their three-game goalless run.

Mourinho has moved to strengthen his midfield with the signing of Gedson Fernandes and though Spurs fans will hope the Portuguese youngster can make a quick impact, ‘hope’ is all they have while we know so little about how the 23-year-old might settle in, especially having barely played for Benfica in recent weeks. His first impression at Watford was positive in parts, and one penetrating run to get beyond the hosts’ defence was a rare sight in a static Spurs display.

Even if Fernandes is an instant hit, Mourinho has a huge task finding a the right partner for him, despite the abundance of options.