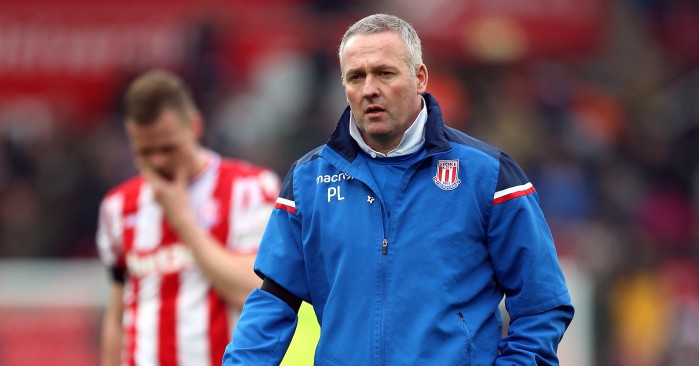 Paul Lambert was asked this week if he regretted taking the Stoke job as he stared relegation squarely in the chops. Did a manager who had been almost three years out of the Premier League regret being plucked out of unemployment to be given a two-and-a-half-year contract with a top-flight club after winning fewer than a quarter of his games in his last spell with Aston Villa? Did he balls.

You absolutely cannot blame Paul Lambert for taking this job; candidly he admits he was not first choice but he did not care. You absolutely can blame Stoke for a recruitment process which seemed to involve looking down a list of managers who had experience of the Premier League and appointing one who was a) available and b) keen.

When Stoke chairman Peter Coates said that “Paul greatly impressed us with his knowledge of our squad and had a clear plan of how he would improve our results”, it made us despair for the future of football management. Do other managers turn up for interviews not knowing their Ryan Shawcross from their Peter Crouch? We could all have knowledge. We could all have a clear plan. But we would not get an interview because we have not managed over 100 games in the Premier League. Which, incidentally, means that we have not lost well over 50.

Is there any other industry where experience is the key marker, regardless of whether it is positive or negative?

“We were determined to appoint someone with Premier League experience or an extensive knowledge of English football,” added vice-chairman John Coates. Foiled by the fact that they had already employed and sacked Tony Pulis and Mark Hughes, and David Moyes, Roy Hodgson and Sam Allardyce were all inexplicably back in the Premier League, they chased Martin O’Neill and then settled on Lambert. Because he had Premier League experience.

He now has another ten games of Premier League experience but only one victory, and it is hard to have even the smallest of smidgens of sympathy for Stoke. They are paying the price for one of the most unambitious Premier League appointments in history.

Paul Lambert has a 10% win ratio as Stoke manager only Chris Kamara has a worse one with 7.14% in 14 games It’s not working

Obviously, Stoke are not alone. As Daniel Storey wrote this week: ‘There have been 15 mid-season managerial appointments in the Premier League since the beginning of 2016/17. Ten of those 15 have been British managers aged 45 and over.’ But no appointment has taken us by surprise quite like Lambert’s; he was British, over 45 and barely on anybody’s radar. And if we were underwhelmed and fans were underwhelmed, how did the Stoke players feel?

Even this week Lambert spoke about his players having “confidence from performances” – despite eight games without a victory – and bemoaned the fact that they were just missing a slice of luck. Against a below-par Tottenham they again battled and again created chances (despite having just 33% possession) but again lost to leave themselves four points from safety.

But if you do not buy a raffle ticket, it seems a tad ridiculous to blame luck for your lack of windfall.