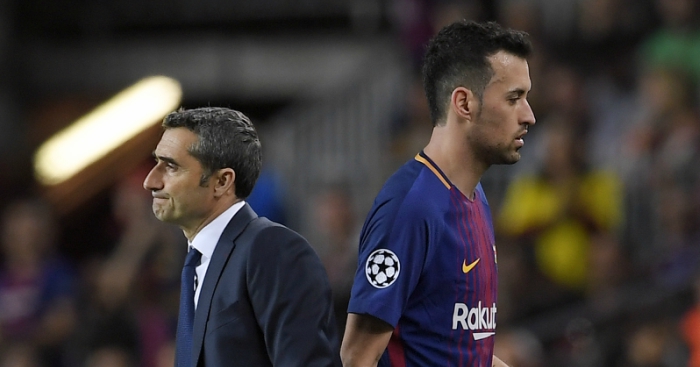 “Italians can’t beat you, though you can lose to them.”

In the immediate aftermath of one of the most humiliating, humbling nights in Barcelona’s modern history, it felt apropos to recall a quote from one of the club’s most famous sons. As perhaps the greatest exponent of totaalvoetbal, Johan Cruyff was always cast as the antithesis – the antidote – to the more defensive approach: Italy’s catenaccio.

On Tuesday, Cruyff’s claim was given new meaning. Barca most certainly lost to Roma in the second leg of their Champions League quarter-final but, in truth, they had beaten themselves. Their approach, their mentality, their starting line-up for the return leg was, in the glare of hindsight, proven foolish. As Ernesto Valverde admitted after the 3-0 defeat: “I am responsible absolutely, I am the visible head of the team and it was down to me.”

Few will argue. Barca were incredibly fortunate to ever lead this tie 4-1, two own goals and two further defensive mistakes masking an underwhelming performance at the Camp Nou in which Roma matched them for large swathes. Much like in the first leg against Chelsea in the previous round, their weaknesses had been exposed, but not ruthlessly enough.

Roma would not make that same mistake again. As soon as Edin Dzeko fired them into the lead in the second leg, belief surged through them as it was sapped out of the visitors. Barca, a team of perennial champions, of Lionel Messi, Gerard Pique, Andres Iniesta, Sergio Busquets and Luis Suarez, were overrun and outplayed. They failed to stamp their authority on a tie they were in complete control of, as no player registered a passing accuracy higher than 88.5%. They played like cowards, and it was a directive from the manager.

Valverde was correct in his pre-match assertion that “overconfidence” could be Barcelona’s downfall, but he went too far in trying to redress that balance. To play with caution is no crime, but it has to be combined with intent and purpose. Barca played into Roma’s hands by granting them the initiative from the kick-off, and only in the closing stages, when the unthinkable had happened and Roma had scored their third, did they try and reclaim it. It was too late.

Two teams went into Tuesday’s quarter-finals with the hope of protecting a three-goal lead. Both were away, and both conceded early. Liverpool kept their hands on the wheel and their nerve in oncoming traffic, while Barcelona panicked and were blinded by the headlights.

Perhaps it was simply an inevitable consequence of employing a coach with limited experience in European competition. In ten seasons of UEFA Cup, Europa League and Champions League football, Valverde has won just eight knockout ties. His adventure to the final of the UEFA Cup with Espanyol in 2007 accounts for four of those, and represents the only time he has taken a team past the quarter-finals.

Or maybe it was the result of an issue Valverde has allowed to fester throughout the season. A lack of rotation means nine Barcelona players have played more than 3,000 minutes in all competitions this season – more than Real Madrid (6), Roma (4) and Liverpool (2). For Bayern Munich, a team pursuing a potential Quadruple, that tally is three.

Messi has missed just 207 minutes in the league this season compared to Cristiano Ronaldo (690) and Mohamed Salah (488), and although neither player will end the campaign with domestic glory, rotation might help them realise their European ambitions. Valverde’s thirst for an unbeaten season in La Liga has ended any hope of the club completing a third Treble; only three days prior to Tuesday’s second leg, Messi played the full match in a relatively meaningless game against Leganes, while Ronaldo was substituted in the 63rd minute of the Madrid derby.

It takes just one match to ruin your entire season. Valverde learnt the hard way.

It was in the Stadio Olimpico, where Barca completed the European leg of their canter to six trophies in 2009, that the Catalans were embarrassed on Tuesday. Valverde had warned that “extraordinary things can happen in football” on the eve of their return leg against Roma, but there was little precedent to expect the unexpected in the Italian capital. Only twice before in Champions League history had a team recovered from a first-leg deficit of three goals or more to advance in a knockout tie. This surrender will go down in history.

Most damning is that Barca’s collapse was stretched over 90 minutes, not simply the result of a brief burst of Roma dominance. The hosts were in control of the game from their sixth-minute opener to Kostas Manolas’ crucial goal in the 82nd.

As Pep Guardiola once noted, “Johan Cruyff painted the chapel, and Barcelona coaches since merely restore or improve it”. In the case of Valverde, he has chipped away ever so slightly at the stonework, and has left superficial cracks in the glass windows. It would be foolish to suggest a manager on the brink of a domestic double in his first season has been anything close to a failure, but it was the Spaniard himself who cost the club an opportunity at something much greater.

How much of every Grand Prix do you watch? (Planet F1)