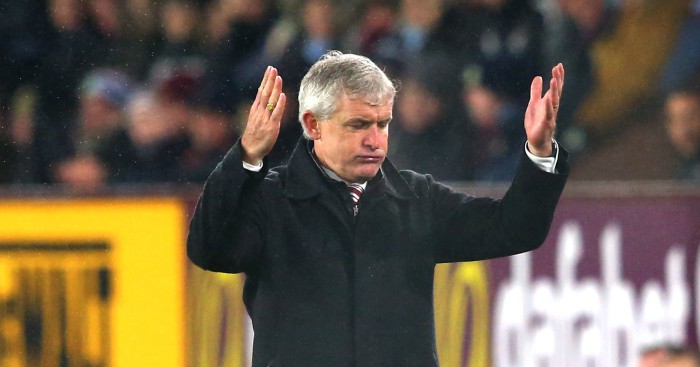 “There’s been an undercurrent since I’ve been here, ” said Mark Hughes on Monday, by now under the worst pressure of his four-plus years at Stoke. “On the day I was appointed there was a car outside the stadium with ‘Hughes out’ written on it. That was before I even got here!

“But I understand it. Some people won’t like you or your teams, your picks, your substitutions, some don’t like your hair or the way you speak.”

Missing from that list of possible reasons to dislike Mark Hughes are two things that had apparently not occurred to the Stoke manager: Results and performances. The latter have been almost entirely shocking over the last 18 months and the former have been pretty catastrophic, but Hughes is the kind of man who will walk out of the Britannia Stadium when he is eventually sacked (and reports suggest it could come as early as this weekend) and believe that he has done a bloody good job.

Stoke have now taken a pathetic 64 points from 61 games as the high of the 2014/15 season when they amassed a Premier League record 54 points became 44 points just two years later. They are now on course for just 36 points so all the talk of Hughes offering a ‘steady hand’ and ‘guaranteed survival’ now looks misplaced. The number of Stoke fans who want to at least wait until the end of the season to replace Hughes is dwindling by the week, and this week has been truly disastrous.

The result – if not the capitulation – at Tottenham was understandable, but to go to Turf Moor, watch Burnley produce their worst performance of the season, and still emerge with no points? That is unforgivable. “Please don’t tell me that anyone thinks they deserved to win that because they didn’t,” said Hughes, apparently oblivious to the notion that somehow contriving to lose a game that the other team absolutely did not deserve to win is pretty damning in itself. They were sh*t and you still lost? The buck stops here, fella.

Hughes paints this and other defeats as somehow beyond anybody’s comprehension, as if The Beatles were wrong and luck is actually all you need. But when the man running your own club’s Twitter feed can see issues coming…

75' Burnley seeing more of the ball now, particularly at the back, crying out for some pace to pressure the hosts. Perhaps Choupo-Moting and/or Berahino? (0-0) #SCFC

…then why can’t the manager? Hughes did not react for another ten minutes, when he brought on Eric Maxim Choupo-Moting and replaced the only man who ever looks like he might produce something special for Stoke. Saido Berahino remained on the bench, of course – it has been five weeks since he was last seen on a Premier League pitch.

“The way we set up isn’t the best system for Saido,” said Hughes last week, talking as if he weren’t the one who a) bought Berahino for £12m and b) developed that system, largely based around the giant Stoke comfort blanket that is Peter Crouch. Berahino will presumably shed as few tears as Stoke fans when Hughes’ lives finally run out; and no, his problem will not be with his hair or the way he speaks.