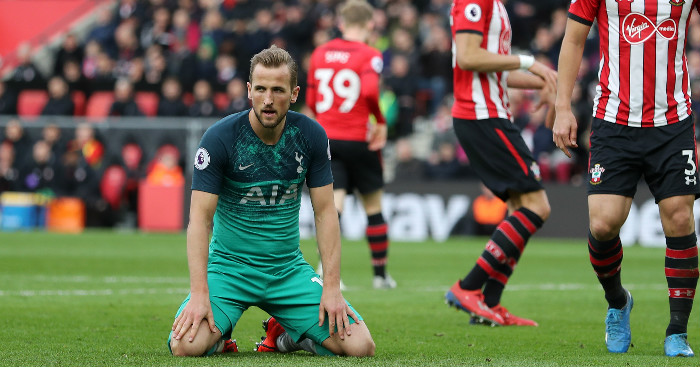 Southampton’s comeback victory at St Mary’s is a potentially enormous result for them. Liverpool are now the only top-six side they have to play in their remaining league fixtures; Cardiff and Burnley must both play four of the top six.

This game was Southampton’s season in perfect microcosm: a terrible start in which they were battered and bruised but somehow hung on just enough to give themselves a fighting chance, and taking that chance by roaring back after the midway point. They remain two points clear of the relegation zone, despite Cardiff City’s own impressive victory over West Ham.

So too was this game an indicator of Tottenham’s current struggles: the effort is there, the talent is there, the ideas generally look like the right ones, but Mauricio Pochettino’s Tottenham just cannot turn that into results; not in domestic competition, at least.

Tottenham hit the woodwork twice in the first half, with Maya Yoshida almost putting the ball into his own net and Christian Eriksen seeing a free kick come clattering back off the bar. So when Harry Kane gave them the lead on 27 minutes, it seemed like a routine victory was on the way for Tottenham.

Then it all came crumbling down. Relegation-fighting Southampton were resurgent after an absolutely woeful first half, but two goals in the space of five minutes late in the second half meant Ralph Hasenhuttl’s side claimed the three points in sensational circumstances.

There was little Tottenham could do about the second, an exquisite James Ward-Prowse free kick, but the first showed the hallmarks of their recent decline: tired minds and tired bodies failed to react to a cross into the box, and Danny Rose was simply not on his guard as the ball went through his legs to allow Yan Valery to scuff in the equaliser.

Southampton’s showing in their spirited 3-2 defeat to Manchester United last week showed they are not to be taken lightly – with the same two players on the scoresheet, strangely. But where Ole Gunnar Solskjaer’s side were able to find their breakthrough, Spurs struggled in vain.

That leaves Spurs with just one point from their last four league games, and looking in serious danger of not only giving up third place, but slipping out of the Champions League places altogether. If Chelsea beat Wolves on Sunday, they will have at least two sides within three points of them, regardless of the result in the Arsenal v Manchester United game.

There were indications earlier in the season that this might happen. Despite their recent lofty position, Spurs have been subtly but noticeably less sharp up front this year than last season, and have struggled in defence in ways that would have been surprising from a Pochettino side in previous years.

Neither of these have been the result of Tottenham falling off a cliff, but rather a slow, excruciating grind to a halt. The big European nights may bring enough of a surge of adrenaline to get them through, but when it comes to their more prosaic workaday league fixtures, they look just that little bit short of their best – and that can make a huge difference at this elite level of competition. Six of the seven goals they have conceded in their last four league games have been in the second half, four of which were in the last 15 minutes. Had it not been for Pierre-Emerick Aubameyang’s desperately poor penalty last week, that would have been five.

This is far, far from the kind of form they wanted to carry into their new home, and in case anyone needs reminding, Spurs still need to go to both Anfield and the Etihad Stadium, with at least two more testing Champions League games to fit in to their schedule.

We may be anti-kneejerk and anti-narrative, but Tottenham’s issues were not just easily identifiable before the season started; they were glaring 18 months ago. After reaching the point of watching their side labour around the pitch week after week, the Spurs fans that screamed that the side needed fresh legs and fresh investment have been vindicated. Cause, meet effect. It is incredibly frustrating to watch your side go through a slump that is both avoidable – because this problem could have been fixed – and inevitable – because it wasn’t.

Looking after the balance sheet is one thing, but there is a difference between fiscal responsibility and cutting off your nose to spite your face. Yes, that new stadium may have taken a huge chunk out of the budget, but nobody is asking Daniel Levy to go after Neymar, Kylian Mbappe and Philippe Coutinho, or to go out and sign a dozen new players. Just two or three new faces over the course of a couple of years would have allowed Pochettino to give his first-team regulars a bit more of a rest.

If that proves to be the difference between qualifying for the Champions League or not, then the millions they will lose out on will mean they have failed to sign players that would have paid for themselves. Even if you insist on running a football club as a business, that just doesn’t make sense.