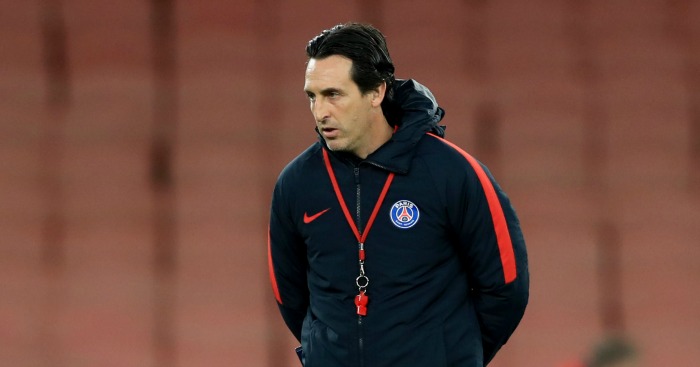 Unai Emery has never known pressure like it. Six months ago he was touted as European football’s next big managerial thing, having won three consecutive Europa League titles at Sevilla and enjoyed a spell at Valencia which improves in hindsight every time that club scrapes further into the bottom of its own barrel. By December, his reputation is on the line.

In June, Paris St Germain president Nasser al-Khelaifi made Emery his No. 1 target, and what PSG want, PSG usually get. Khelaifi had called Laurent Blanc’s season a failure while Blanc was still in charge, and spoke of the need to “start a new cycle”. The failing Blanc had reached the Champions League quarter-finals, won all four domestic trophies on offer and finished 31 points ahead of second place in Ligue Un.

Blanc would have been forgiven a wry smile as he examined Wednesday morning’s L’Equipe. Having done the hard part by earning a 2-2 draw at the Emirates a fortnight ago, Emery’s side somehow contrived to match that scoreline in the Parc des Princes against Ludogorets. It wasn’t as if an injury-time equaliser scuppered their chances; Angel Di Maria’s late goal avoided what would have been the most surprising Champions League defeat in some years. No urgency, no invention, uninspiring substitutions. PSG finished second in a one-horse race.

For Emery, this is just another blow. Having replaced Blanc and immediately talked of “helping the club reach its great ambitions”, the Spaniard has quickly realised that managing an elite club is far from easy. It’s not unthinkable that, should things continue as they are, he could be sacked by February. Time to start another new cycle?

PSG’s biggest difficulty is that they are an elite club in wealth alone. Combine that with their location in Europe’s fifth-ranked league, and PSG are the superclub that is least attractive to elite players. Having lost David Luiz, Lucas Digne and Zlatan Ibrahimovic in the summer, their replacements in each position were nobody, nobody and nobody. Grzegorz Krychowiak, Thomas Meunier, Jese and Hatem Ben Arfa arrived in Paris, but none have started with a flourish.

Ben Arfa is Emery’s biggest individual failure. Thiago Motta, Marco Verratti and Adrien Rabiot are all injured, yet Ben Arfa has been criminally underused by a manager who found a hasty way to lose the goodwill of supporters. Having been named in Ligue Un’s team of the year at Nice, it is bizarre that Ben Arfa would have started only four league games.

Instead Emery is reliant on the form of Edinson Cavani, whose domestic record has indeed been excellent. The Uruguayan scored six times in the Champions League group stage, but his profligacy in both games against Arsenal created a seed of doubt over first place in Group A. The ineptitude of his teammates on Tuesday let that seed grow into a tree.

There is no domestic bliss for Emery to embrace. If PSG came second in a one-horse race on the last day of the group stage, things have gone even worse in Ligue Un. They sit third, four points behind Nice having lost 3-0 to Montpellier at the weekend. Emery’s PSG have dropped 13 points in 16 league games; Blanc’s PSG dropped 18 all season in 2015/16.

For now, Khelaifi is sticking by his man. “Our coach is very good. I am not angry but I am disappointed I expected more of the players,” was his response to questions on Wednesday over Emery’s under-performance. Anyone expecting that patience to continue ad infinitum is a fool. Qatar Sports Investments are not in the business of accepting failure.

So far, 2016/17 has been a rough ride for a coach looking to take the step up into elite club management, and a reminder to those who think that the higher up the ladder you go, the easier it gets. As the great poet the Notorious B.I.G. established, Mo Money can often mean Mo Problems.