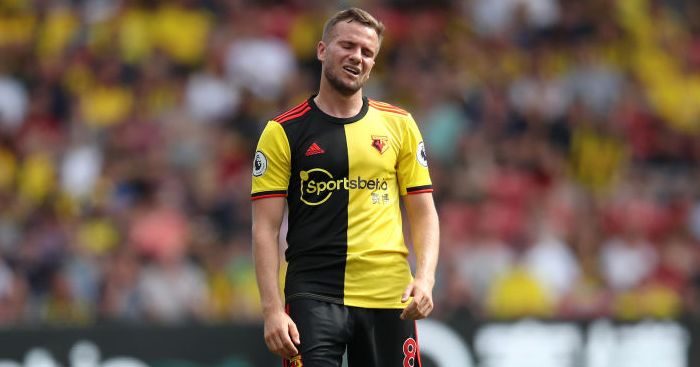 Almost a year ago, Watford were knocking over Tottenham and heading to the first international break of the season unbeaten. Twelve months later, they aren’t riding nearly as high. A curious battering at home to Brighton led to a narrow loss at Goodison Park and, so, West Ham’s visit to Vicarage Road brought the first pulse of pressure.

Those jitters were in evidence early on Saturday when, after barely a minute, Manuel Lanzini drew a clumsy foul from Adboulaye Doucoure and referee Chris Kavanagh pointed to the spot. Mark Noble converted and Watford’s start to the year began to feel that much worse.

Andre Gray equalised, though, running onto a fine Will Hughes through ball to lash across and beyond Lukasz Fabianski. The ball hit the net and everything felt as it should. The atmosphere was almost exactly as it had been in that win over Spurs. The sun was out; everyone was happy.

It didn’t last. It should have done, but it didn’t.

Maybe poor form becomes self-perpetuating at a club like this? It’s outdated, but Watford retain a reputation for being impatient. All the players picked to start by Javi Gracia this afternoon have known at least two head coaches in two years. A couple have had three, some even four. One of the legacies of that past could be that Watford squads find it harder to arrest their declines; it’s just a theory, but it’s not an illogical one. If players expect change to be enforced upon them, rather than being responsible for it themselves, then that doesn’t breed the most proactive energy.

A couple of days ago, I wrote that Watford’s start to the season was really just an anomaly and that too much of the negativity was instructed by outside perceptions of the club. That doesn’t seem right, though. In fact, it was hopelessly wrong. After watching this performance, it seems outright naive.

Watford weren’t awful at Vicarage Road. That’s not the point. Actually, for somewhere between half an hour and 45 minutes, they were arguably the better side. Certainly they looked the more likely to score. The third goal always felt like it would be decisive and when it came, after Sebastien Haller converted from close range to score his first for West Ham, it broke the home side into eleven different pieces.

Suddenly, all the neat creative phases that they had diligently been constructing vanished. Their attacking play lost its method. The first half had its imperfections, the kind of broken passages of play which characterise a team out of touch, but the distance between Watford’s individuals grew and grew. The thrusts up field became desperate, the defending chaotic.

That sort of mental collapse is always instructive. After going behind for the first time, Watford had plotted their way back into the game. It became obvious early that West Ham had issues hiding the gaps between the centre-halves and full-backs and, calmly, the home side began to jab at that weakness.

When they went behind for the second time, there was none of that resolve. Every player in gold became consumed by the prospect of losing three in a row and, even though they only needed a single goal and had over 25 minutes to find it, their defeat looked inevitable. In some instances that would be understandable. Against Manchester City or Liverpool, those goals have a notoriously crushing effect. But this was West Ham at home and nothing about their defensive performance suggested that they were impenetrable.

So the limp, panicked response was really worrying. As was the reaction of the crowd, which veered between irritation with the visitors’ gamesmanship and annoyance over their periodic roughhousing, and a deep, semi-visceral displeasure with their own players. The mood is really starting to turn and, irrespective of how much this club has grown in the last few years and how admirable that development has been, it’s a conclusion which becomes hard to avoid.

Whether it’s the symptom of a terminal condition is another matter, but this is definitively not just a case of early-season lethargy or a disproportionate situation constructed by footballing randomness. Watford are wrong in all sorts of ways. These weren’t points that they lost, they were given away.