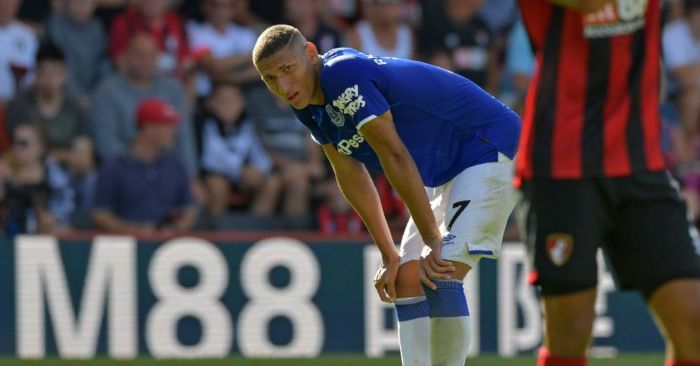 ‘If not now, then when?’ asked Daniel Storey in July. But instead of pondering Steve Cook’s chances of international recognition, directly lobbying for Romelu Lukaku to be knighted or demanding for ‘cumulative points’ stats to be introduced into mainstream media, he was wondering whether this was finally time for the Premier League’s VIP party to be crashed.

The reasoning was sound. ‘The clubs immediately below the top six are growing stronger,’ and would continue to do so throughout the summer. Each ‘invested significantly’ and ‘demonstrated their ambition’ to sustain their success instead of stagnating.

‘All of those four clubs have reasons to be buoyant,’ he wrote. ‘Wolves have maximised their relationship with Jorge Mendes to quickly establish themselves as a Premier League club, and show little sign of allowing expectations to cede. Everton have finally realised the benefits of quality over quantity, investing smartly in key positions and likely to buy a first-choice centre forward to complete the set. In Fornals, Manuel Lanzini, Felipe Anderson, Andriy Yarmolenko and Haller, West Ham have a potentially wonderful front five. Leicester have a core of eight players (Tielemans, James Maddison, Ricardo Pereira, Ben Chilwell, Wilfried Ndidi, Demarai Gray, Harvey Barnes and Hamza Choudhury) aged between 20 and 25. At 25, Pereira is the oldest of the group by almost two years.’

But after just five games, is it time to reconsider that position? Even with Leicester in fifth, keeping pace with Manchester United and Chelsea, should expectations be downgraded?

Given two opportunities to solidify their challenge already, the Foxes squandered both. Drawing with Chelsea and losing to United at Stamford Bridge and Old Trafford is forgivable – predictable, even. But those games exposed those same familiar frailties that cannot be overcome in the transfer market. Leicester have taken more of their shots (61%) from outside the area not through choice but by force. When their Plan A – playing balls in behind for Jamie Vardy to chase – fails, they have a tendency to be ordinary.

Leicester are better than most Premier League teams. They have already proven themselves superior in comparison to Bournemouth, vanquishers of Everton on Sunday, and a side that might have its gaze fixed upwards, were it not for a leaky defence. But Eddie Howe will justifiably be looking to establish the club in the chasing pack rather than trying to match the sprints of those so far ahead.

Everton, a club perennially struggling with the task of walking before they can run, are impotent on their travels. They have won three league away games this year: at relegated Huddersfield and Cardiff, as well as West Ham. And while the Hammers finally seem to have an actual plan, they are still West Ham.

The advent of Europa League football has already taken its toll on Wolves, the finest example of how even the most apparently steady of foundations are no guarantee of bridging such a considerable gap. Nuno Espirito Santo’s side finished 7th, sold no-one of note and spent over £85m on reinforcements in the summer. They are the only team of the 91 in the entire Premier and Football League yet to take the lead in a single game this season.

The assumption was that Wolves – and Leicester, Everton and West Ham – would simply continue doing what made them great, while automatically eradicating their negative points. That they would continue securing impressive results against the Big Six while suddenly doing the same against the rest. The reality is that adding ingredients does not make a better meal a certainty. Being capable of beating any side on any given day is not the same as overcoming them in a 38-game season.

They improved, but the quality of the carrot they are chasing was underestimated. United, Chelsea, Arsenal: all are undeniably flawed yet a level above. It’s all well and good chipping away at a glass ceiling, but you won’t get far when it’s double-glazed.

And so to Everton, whose vast investment came with the caveat of losing Idrissa Gueye, and with him their midfield identity and protection. Bournemouth sliced through them as often as Leicester carved through the Cherries last month.

Marco Silva will be worried about his side’s defending, lack of a consistent goalscoring threat and apparent travel sickness. Their policy of following any number of steps forward with at least a couple back is hardly conducive to progress. And they are not alone in taking such a frustrating journey to the promised land.

That we have reached mid-September with the same top six as last season – and the season before and the season before that – in the top seven feels a little underwhelming after the weeks and months of hope and promise. The chasing pack was not meant to suffer from stitch this time, never mind this early.