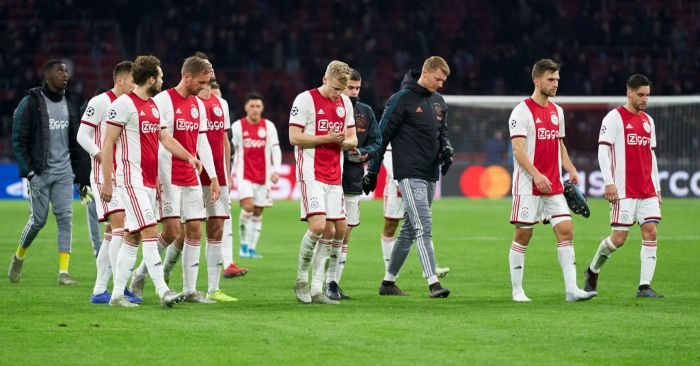 The pervading opinion was that it was ‘not fair’: ‘not fair’ to punish them for the relative weakness of their domestic league, to suppose that lightning would strike twice when their conductors had been stolen, to expect Ajax to endure the ignominy of having to go through a qualifying stage for a tournament they had reinvigorated and re-energised mere months earlier.

Tottenham, their conquerors on that fateful night in Amsterdam, were guaranteed a place in the subsequent group stages, along with three other Premier League sides. They had finished fourth by a single point; Ajax won a league and cup double. But years of underperformance in European competition cost the Eredivisie an assured spot almost three years ago.

It is not the greatest case for the defence of widespread Champions League reform.

Ajax themselves only scraped through to this stage. A 2-2 draw against PAOK in the first leg of their third qualifying round tie put their place in jeopardy. Craig Pawson awarded them three penalties in a 3-2 second-leg home win.

It was a reminder, were it needed, that this was a side recovering from major surgery. They were learning to walk again after having already run at a captivating full sprint.

How Erik ten Hag would have cherished such benevolent officiating on Tuesday. Ajax woke up top of their Champions League group needing only a draw from their final game, but presumably experienced a sleepless night in third. A single goal at home to a Valencia side characterised by turmoil would have seen them reach the knockout stages; three shots on target in more than an hour after Rodrigo’s surprise opener meant they got precisely what they deserved.

It was a far cry from the swashbuckling performances that overwhelmed Real Madrid at the Bernabeu, Juventus in Turin and Tottenham in north London earlier this year. This was a side going through the motions, expecting a goal – a spark – that never seemed likely to come.

They might also point to another refereeing performance – that of Gianluca Rocchi at Stamford Bridge. The Italian’s enforcement of triple punishment – sending off Daley Blind and Joel Veltman while awarding a penalty – turned an impressive 4-1 lead after 55 minutes in November into an infuriating 4-4 draw by the 90th. Chelsea finished a point ahead of Ajax.

This is no failure. Only three sides have ever earned more points in the group stages while being knocked out. These were fine margins that Ajax will contemplate instead of huge deficits. And the Europa League is no small consolation to a side that cherished their run to the final in 2017.

That was the foundation from which they built such brilliance last season. It is a shame they could not recapture it, but ‘fairness’ does not come into the equation. Ajax, qualifying stage or not, entered a group containing a managerial novice prevented from making signings, a side on its seventh manager since the start of 2016 and a team that had not – and still have not – won in the Champions League since November 2012. Whether or not they should have to fight for a place at Europe’s top table, they have inexplicably asked to be excused before the main course.