Tottenham are often unfairly labelled as 'bottlers'. But they have that reputation for a reason... 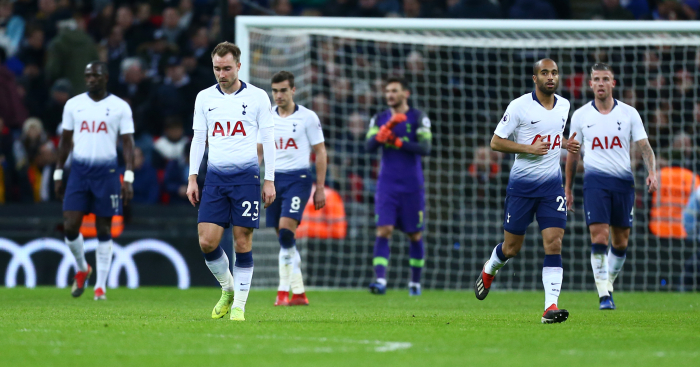 Yet this is a team derided as chokers, bottlers of the highest order. A side that, even as players, managers, fans and now stadiums change, one thing remains the same: Spurs simply cannot handle the pressure.

That was the suggestion in 2016/17, when they won 12 of their last 13 games to finish second behind Chelsea. The same accusation was made the previous season, when they came from fourth after 19 games to push Leicester all the way before eventually finishing third. They were never top in either season, nor should they ever have been the closest contenders to the two respective champions. But the consensus was clear on both occasions: these were Tottenham’s failures, and theirs alone.

History is repeating itself however. In isolation, Tottenham never really ‘bottled’, ‘choked’ or tripped in the Premier League title races of 2015/16 and 2016/17. They put themselves in positions were great success came across as failure. But when combined with their baffling defeat to Wolves on Saturday, and their apparent surrender just as they threatened to head into a war with Liverpool this season, it no longer feels like a coincidence.

Even if it is a myth, Spurs aren't helping to dispel their inexplicably popular reputation as title bottlers here.

What makes matters worse is that Tottenham led at Wembley. Harry Kane MBE struck first, struck fast and struck in the most brilliant way after 22 minutes, and the hosts looked comfortable; they led with 20 minutes remaining. Yet Wolves scored not once, not twice, but thrice in the closing stages to secure a famous victory – and an infamous defeat.

This is Tottenham’s first loss to a promoted side since April 2012 – a run of 39 games. And it was oh so avoidable. This might be a squad stretched to its limits by the fixture pile-up, but it had won five straight Premier League games, six straight home games, and had not lost to a side in the bottom half since May. Wolves are a very good team, but a beatable one when you have a lead against them at home.

Tottenham seemed to time their title challenge perfectly. They always improve in the second half of a season after a slow start, yet burst out of the blocks immediately this time around. Only the brilliance of Liverpool masked the impressive nature of their charge, and even Manchester City were leapfrogged.

Spurs crumbled almost as soon as they had finally been built up as credible challengers. When they beat Manchester United to move up into second in August, they lost to Watford six days later and Liverpool in their next game. It took them all of three days to lose their footing again after climbing back up into that spot.

It really isn’t a good look, not from a team who constantly claim to have learned their lessons before failing the crucial part of the exam.

If Tottenham do fail to win the league this season, it would again be unfair to paint theirs as the weakest, most wasteful challenge to the eventual champions. Whichever of Liverpool or City do not emerge with the crown in May should be beaten with that particular stick. But for the third season in four, Spurs will be decried as ‘bottlers’. It is becoming more difficult to suggest otherwise.