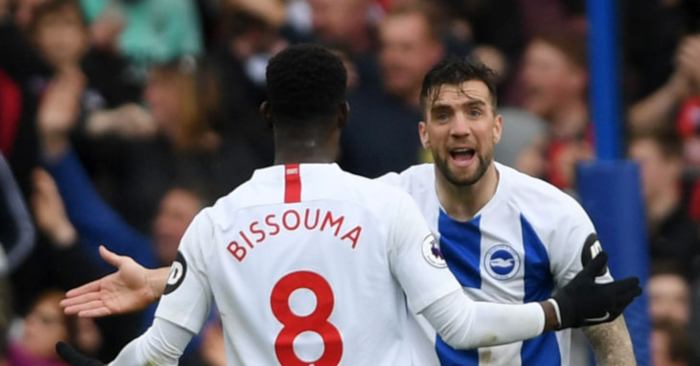 “It goes without saying that at this moment won’t want to go into those two games having to win,” said Chris Hughton, eyeing Brighton’s last two fixtures – away at Arsenal and home to Manchester City – with exactly the right amount of trepidation; Brighton absolutely need to be safe by the end of April. Right now, their only real hope is that Cardiff cannot bridge the five-point gap; the bad news is that the two clubs meet on Tuesday with the Bluebirds targeting the twin trophies of three points and the kind of momentum that might make them favourites to survive.

On recent form, there can be no doubt that Brighton deserve to be in this mess. They have been worse than Cardiff in this calendar year and better than only Fulham and Huddersfield Town, who have long since acclimatised themselves to relegation. That they have not scored in over six hours of football is nothing to do with luck – against a Bournemouth side who have been in wretched form, they did not manage to produce a single shot on target until the 91st minute, while allowing the opposition to tear through them at will.

Those who pay any attention at all to xG will note that this has long been coming – they have been slowly sliding towards a position that matches their underlying statistics. Since back-to-back wins in early December lifted them into the top half of the table, they have been tumbling towards their current 17th place, hoping that the season finishes early enough to stop them going under. They will hope that a 5-0 home defeat to Bournemouth is as low as this ship goes.

Assuming Hughton will still be in charge for Tuesday’s clash with Cardiff – and there are obvious parallels between Brighton’s current predicament and that of Norwich five years ago, when Hughton was sacked with the Canaries one place and five points above the relegation zone with a portentous run-in looming – then he is facing the greatest task of his career to somehow rouse this Brighton side to face Cardiff on Tuesday night. He should be very thankful indeed that Neil Warnock left Burnley raging about penalties not awarded on Saturday night. It means that gap is still a substantial five points, with Brighton nursing a game in hand.

Right now, the bookies tell us that Cardiff are doomed and that Brighton are 17/1 outsiders to go down, but those bookies are looking at the league table rather than paying attention to the Seagulls’ astonishingly bad form. While Cardiff competed at Burnley, Brighton were never even remotely equal to Bournemouth, even before Anthony Knockaert lost his head and earned himself one of the least contentious red cards of the season. This Brighton side is absolutely not too good to go down; on Saturday they were humiliated by their worst home defeat in over 45 years.

Those final two games are looming like a dissertation deadline, and the fixtures between now and then are providing little comfort – when your easiest remaining away trip is a visit to Wolves, you know you are in deep trouble. Their chance to nip it in the bud comes on Tuesday, but are Brighton capable of taking any chance at all?