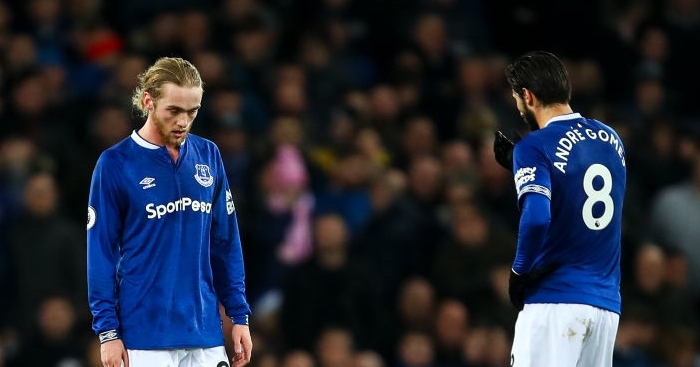 Sorry Everton, but your secret is most certainly out now. A few had their suspicions, while plenty were still completely unaware. Yet the confirmation arrived on Sunday: Idrissa Gueye is comfortably your most important player.

For those who learn no more and no less than five things from any single football match, Everton’s defeat to Tottenham was perfect late afternoon viewing. These games, shoved into the fabled Super Sunday slot as the only match of the day, often fail miserably to live up to expectations. Not at Goodison Park, where two teams combined for eight goals over a 90-minute spell that was never anything less than absorbing.

The first lesson came in the 27th minute, when proof was provided that Jordan Pickford would make a terrible firefighter. He arrived onto a scene that Kurt Zouma had clumsily cordoned off, and proceeded to pour gasoline everywhere before lighting a match. Heung-min Son’s finish was as exquisite as the mistake that led to it was avoidable.

Tottenham themselves held the next class, offering proof – were it needed – that this wonderful side is blessed with a strong backbone. They had not earned a single Premier League point from a losing position since the final game of last season, yet took just 21 minutes to convert a first-half deficit into a two-goal half-time lead. This was the first time ever that Son, Harry Kane, Dele Alli and Christian Eriksen all scored in the same game; why would Mauricio Pochettino end this journey so soon when there is still so far for them to go?

Another clear lesson was that the slight cracks Everton created in the glass ceiling against Liverpool have already been repaired. This was a sobering defeat for a team that now has one win in their last seven games. They had more points (25) after 18 games and three managers last season than they do under Marco Silva this (24).

And this really did feel as bad as anything that the Toffees conjured up last season. An expensive squad floundered, an expensive manager failed, and an expended support made their feelings heard. Silva is now the first Premier League manager to ever concede six goals or more at home with three different clubs.

That is no coincidence. The Portuguese could be excused for his struggles at Hull, but his short and sweet Watford spell proved his strengths lie not in organising a back line. So much so that at Everton, his entire defensive gameplan often rests squarely on one player’s shoulders.

“He is playing more like our holding midfielder, in the No 6 position,” Silva said of Gueye in October. “In our plan, it is a really important position. Gueye is improving and understanding what I want. He is improving what our plan needs in each moment of the game, using his capacity and aggressiveness in the right way.

“He is really important for us because our other midfielders do not have the same profile and we need Gueye at a good level to help us in those moments, in our reaction and in our defensive and offensive transition.”

And therein lies the problem. Gueye is a unique talent in this squad, the only defensive player who actually benefits from Silva’s preferred high line. He is a one-man midfield, and the system relies on him winning the ball back as soon as possible and returning it quickly to those who are still pushed up the pitch. It is a role very few can carry out.

Yet despite Silva admitting “our other midfielders do not have the same profile”, Everton insist on playing the same way without him. They still used a high line against a Tottenham side who are devastating on the counter-attack; Andre Gomes and Tom Davies had no chance.

Since the start of last season, Gueye has started all but nine of Everton’s Premier League matches. They have conceded 19 goals and scored seven without him, winning just once. That solitary victory came against a toothless Brighton in March, aided by an own goal and a red card.

It remains the exception to one very simple rule: that Everton are not nearly as effective without their most effective player. Quite why Silva is too stubborn to change the plan when the one man he created it for is unavailable is a mystery.