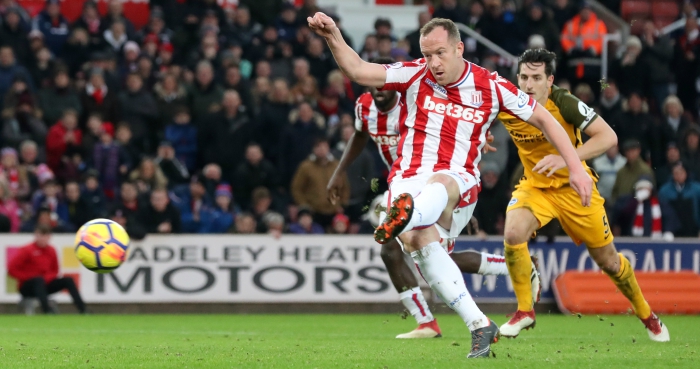 If you were looking for pivotal moments in a fight against relegation, here were three or four in the space of 180 seconds. Paul Lambert might well watch the final three minutes of the draw against Brighton on repeat this week. It might take until the fourth or fifth replay before he finally accepts that Stoke aren’t going to score a winner.

Forget the clearance off the line and missed chance from the follow-up to the penalty miss for now, for each merit their own piece, let alone paragraph. Let’s instead dwell on two Stoke players arguing with each other over almost to the point of scuffle over who takes a crucial penalty at a crucial time of a crucial match. And let’s ask how on earth Jese Rodriguez dares throw a tantrum about not taking it, given his performance level this season. It never rains for relegation-threatened managers, but it pours.

Jese, remember, was involved in the Stoke matchday squad for the first time in two months since being disciplined by Mark Hughes for leaving the Stadium early after Hughes had made his final two substitutions. His return could not have been timed worse. A bad egg has left an unpleasant smell.

If we have learned anything from the Premier League relegation battle this season, it is that glamorous loan signings should be looked in the mouth. Grzegorz Krychowiak has improved at West Brom since a dismal autumn but is still way below his best, Renato Sanches is a boy lost at Swansea and Jese has been a total waste of time at Stoke. As ever, if something looks too good to be true…

Jese may consider his attempts to take the penalty as justified, given Charlie Adam’s subsequent miss. But that overlooks the added pressure he put on a senior player at a time when Adam should have been steeling himself for the upcoming task. It was an act of a selfish player and successful relegation battles have no space for self-interest. Jese’s name will be taken in vain in the Potteries tonight.

Lambert insisted that his team displayed guts, heart and other cliched body parts, because that is what a manager must do. Any display of weakness is an admission of defeat. Open the door of doubt ajar and it will soon be blown wide open. So you walk head on into the wind.

But this was a day of backward steps for Stoke. Brighton had managed more than two shots on target in three of their 13 away games before Saturday, but managed six in total at the Bet365 Stadium, double the number of their hosts. Stoke’s late assault probably justified their point, but they have now taken five points from their last four home games against the promoted three clubs and Watford. Given that they have one away win all season, survival is going down to the wire.

The grim realisation is settling in that Lambert’s new manager bounce may have only lasted for 90 minutes against Huddersfield Town. They have five home games left this season, including Manchester City, Everton and Tottenham in their next three. With four of their five away opponents currently in the top 12, we’ve long since entered must-win territory.

In the clutch moments, a general learns who can be trusted. Jese shouldn’t expect to start another game soon. Lambert will believe that he can do without such solipsism.