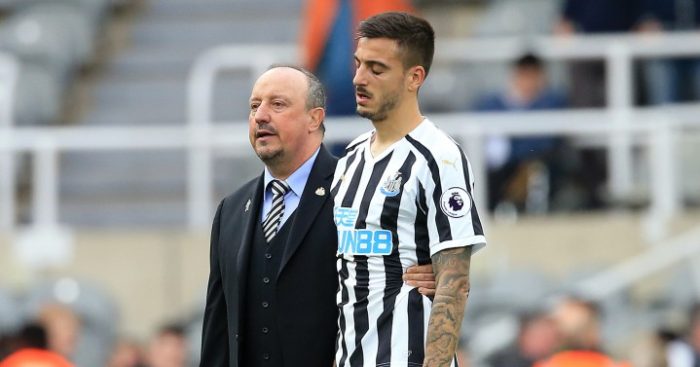 “How s**t must you be, we’re winning away,” sang the Arsenal fans. We know the international break can feel interminable, but we are pretty sure that Arsenal won away two weeks ago at Cardiff. So how s**t must Newcastle be? About as s**t as Cardiff, as it happens. Right now, both are staring down the barrel of a relegation battle.

It’s important to note the nature of the opposition – Tottenham, Chelsea and Arsenal – but it’s also important to note that this is the first time in 31 years that Newcastle have lost their first three home games. The omens from that year are excellent as Newcastle eventually finished eighth, but this current Newcastle side do not have a Michael O’Neill or a Mirandinha to drag them up the division. Instead, they have a Joselu.

They also have absolutely shattered confidence that will have taken another hefty blow from the manner of their defeat to Arsenal. This was not a repeat of the meek surrender of their defeat to Chelsea – regardless of the scoreline being a replica – but a perfect demonstration of their fragility. They hassled, harried and contained Arsenal in the first half, causing far more trouble than they suffered, and yet the minute they went behind they became listless and sloppy, never looking like they could rescue any more than a consolation goal.

A tale of two halves. #NUFC full of energy in the first half virtually lifeless in the second half. Rafa Benitez will be disappointed Newcastle did not capitalise on their first-half pressure. If Rondon and Shelvey are fit enough they should be straight in the side next week.

It did not help that Jamaal Lascelles had left the field at half-time – having barely been tested by the toothless Gunners in front of the watching Gareth Southgate – but that is no excuse for the 180 degree about-turn in attitude and ambition. Before Granit Xhaka’s free-kick, they were toe-to-toe with Arsenal; after Granit Xhaka’s free-kick, they were running in the opposite direction, retreating towards their own goal and into damage-limitation mode.

Is that the inevitable consequence of having a manager who speaks almost exclusively in negative terms about this group of players in this particular situation? The more fuss Rafa Benitez makes about not having money to spend and the more he speaks about how the limitations of his squad force negative tactics, the less likely his players are to believe, to face adversity with what your mother would call a ‘can do attitude’.

“We did enough in the first half to show people we can compete against these teams. As soon as something goes wrong, it’s difficult for us,” admitted Benitez, who claims he is “not worried”. But that obvious mental fragility should surely worry anybody. The Spaniard’s job is not merely to coach set-pieces but to instil some degree of resilience. One well-struck free-kick should not instantly destroy any chance of gaining even a point from a home fixture.

This is by no measure a great Newcastle side. It is not even an average Newcastle side. But it is pretty much the same Newcastle side that survived last season with some room to spare. As the opposition gets easier, the excuses will get harder to swallow. They cannot afford to collapse against Crystal Palace and Leicester.