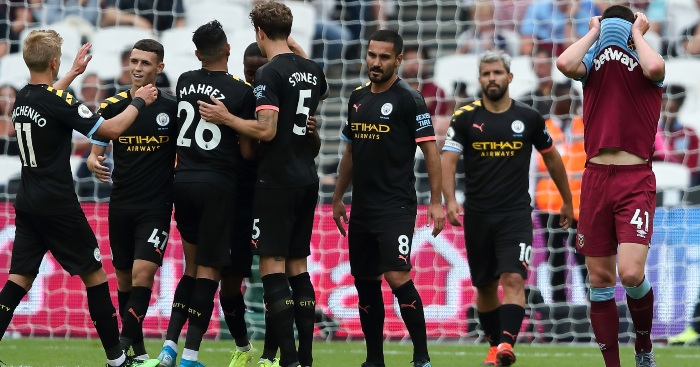 A photo finish gave Manchester City their title on the final day of last season and here, on this opening weekend of the new campaign, the buzz of anticipation was of a similarly tight race to come. Liverpool burst out of the blocks on Friday night seemingly without breaking sweat to signal their intent. But City’s start force-fed West Ham and the rest of the Premier League a hearty appetiser of dust to choke upon.

Jurgen Klopp’s European champions may have had the game won before kick-off last night, but the start of City’s title defence was not meant to be quite so simple. Some hope blossomed during a bright summer in east London that this could be the first time that the Hammers might bloody Pep Guardiola’s nose, or at least lay a glove on his team. But in the end, Sebastien Haller was right to label this a “sh*t game to start with”.

West Ham engaged City initially but all it took was a 25-minute workout to blow away whatever cobwebs may have been left over from the summer. In those early stages, the hosts pressed high, if only to offer an illusion of intent to their supporters, and they were nearly rewarded when Manuel Lanzini pickpocketed Rodri in the sixth minute. The City new-boy was robbed on the edge of his own box before escaping the concession of a penalty when VAR cleared him of wrestling Lanzini to the ground. The Spanish midfielder, City’s only new starter, heeded his warning – though West Ham seemingly refused to take that smidgen of encouragement.

Rather than continue to rush the Premier League virgin, West Ham backed off Rodri and his City team-mates. Initially, Haller and Michail Antonio squeezed the heir to Ferndinho’s throne but Declan Rice and Jack Wilshere appeared reluctant – or perhaps in Wilshere’s case, unable – to box him in beyond the opening exchanges. Within a quarter of an hour, Rodri was able to receive possession facing his own goal and turn. City’s forthcoming opponents may not be quite so keen to back off.

When he was able to play with his head up, Rodri snuggled into the City midfield and looked very much at home, even throwing in the odd snide foul to show that he truly belongs in his new surroundings. He was perhaps lucky to avoid a caution for a couple of infringements before half-time, but by that time, City had established their dominance.

5-0 – Today's victory against West Ham was @ManCity's biggest ever in an opening game of a top-flight campaign. Thrashed.

The champions had another player with plenty to prove to thank for laying on their opener. Joao Cancelo’s arrival this week took Guardiola’s spending on full-backs to £195million and served notice to Kyle Walker that his standards could slip no further. The England defender chose an opportune moment to remind us and Guardiola of his best quality.

Walker clocked 22mph while overlapping Riyad Mahrez, flying past Aaron Cresswell on his way behind West Ham’s defence. Positionally, Cresswell and his team-mates got themselves in a dreadful mess but Walker was ruthless in picking apart that vulnerability and seizing the opportunity to tee up Gabriel Jesus.

Even if Kevin De Bruyne has nothing to prove to us or Pep, the Belgium star looks very much in the mood to make his point anyway. His mere presence was enough to drag Issa Diop from Cresswell’s side prior to the opener and he spent the rest of his afternoon demonstrating perhaps why last season’s title race might not have been quite so close had City been able to rely on him for a greater portion of the season.

For City’s second, his burst beyond Fabian Balbuena and a perfectly-weighted pass into Sterling’s pass was performed with almost disturbing ease. It is nothing new from De Bruyne but still a timely reminder of what City missed for much of last season. They still won everything without their best player.

Many of the questions Guardiola may have posed his squad on this opening weekend were answered in the most decisive fashion. If Sterling’s finishing left much to be desired in the Community Shield, Saturday’s evidence suggest he has spent the last six days working on nothing else. Three second-half goals all showcased the kind of composure Sterling lacked last week and, indeed, for vast swathes of his career. He faced down Lukasz Fabianski three times in the second half: the West Ham keeper was nutmegged, lobbed and conned, in that order.

Guardiola left Wembley last week with a Leroy Sane-sized headache following the winger’s injury which could rule the German out for six months. The City boss admitted he has no replacement for Sane’s speed, but Mahrez made for a most effective Plan B.

"For the first game, it was an incredible result, but we have to improve."

After peeing in a cup this week to clear up the confusion around whatever he may have ingested on international duty, Mahrez made two goals, won the twice-taken penalty and put Walker in behind for the opener. It seems even the irrepressible Bernardo Silva, the Treble winners’ Player of the Season, has a battle to get back into this team.

In contrast to his midfield, Guardiola has rather fewer options at the heart of his defence. With only three senior centre-backs, John Stones might consider himself a lucky starter given his miserable end to last season, when he began only one of the last ten games and found himself out of the squad entirely when City went to Old Trafford for a huge derby. His international performances did his cause no good whatsoever, but at the London Stadium, Stones was reassuringly at ease with the threat of Hammers’ new boy Haller. Granted, the French striker wasn’t even offered crumbs to feed on once City opened the scoring, but that did not diminish his appetite for a scrap, from which Stones and Aymeric Laporte emerged unblemished.

Guardiola has spent most of his summer reinforcing the point that complacency will not be tolerated. A five-star performance on what might have been a tricky opening assignment demonstrates that his players got the message. So too has the rest of the Premier League.