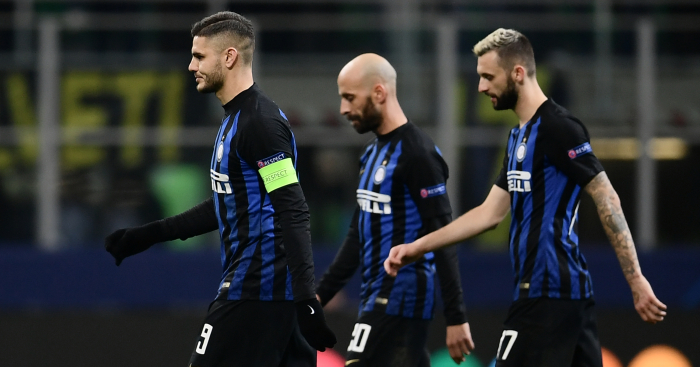 This is the season Italy joined Spain, Germany and England in being given four Champions League places. After Tuesday night, UEFA might ask for one of them back. While England somehow have four teams still standing and Germany and Spain boast three each, Italy’s hopes now rest entirely on the shoulders of Roma and Juventus. While some sympathy is due to Napoli for being plonked in a group with PSG and Liverpool, Inter Milan cannot be afforded any. They really did cock this up.

They initially cocked it up at Wembley two weeks ago when they bizarrely decided not to attack Tottenham despite knowing that a 1-0 defeat was just about the worst result for their qualification hopes. But at least they had the safety net of knowing that simply beating PSV at home would be enough to see them through. And they certainly would have grasped that scenario with two hands at the start of a campaign that began with back-to-back victories.

Then they properly cocked it up. By coach Luciano Spalletti’s admission, they lost their nerve. They bottled it. They allowed Spurs – buoyed by the positivity of Mauricio Pochettino – to progress with the most traditionally Spursy of performances. A homage, if you will.

“We were unable to keep our calm,” admitted Spalletti. “As the anxiety grows, you lose sight of how to control the game and it became end to end. Not every team can beat anyone.”

Those final words are most telling, with Spalletti hinting at deeper psychological problems for a club that has spent too long away from this stage. Perhaps he needs to look at himself and those defensive tactics at Wembley that piled too much pressure onto a set of players not familiar with quite how to deal with it. Not every team can beat anyone. Or even PSV it seems.

Meanwhile at Anfield, Napoli all too meekly surrendered to Liverpool’s superiority, with Kalidou Koulibaly admitting that they “feared” Liverpool. It showed. They almost seemed scared to equalise too early and only really peppered Liverpool’s goal in the final minutes. It had been a curiously passive performance from a team that had twice drawn with PSG and beaten Liverpool in this campaign. Their task was not quite so easy as Inter’s, but to go into the final game needing anything other than a defeat – given the make-up of the group – was a positive Napoli never really embraced.

But it’s little wonder that Napoli came with an inferiority complex. After all, their figurehead Aurelio De Laurentiis said in September that it was a “disastrous anomaly” that last season’s runners-up were in Pot 3. The scene was set. He described the club as “bitter” about being drawn against PSG and Liverpool, with their curious seeding.

The good news for De Laurentiis is that it is unlikely to happen again next season. Thanks to his players matching his fear at Anfield, Liverpool are likely to end this season above Napoli in UEFA’s club rankings. Now it feels like the only ‘disastrous anomaly’ is that Italy have four Champions League places. On Tuesday night’s evidence, they were not ready.