Liverpool's recent draws were the exceptions to their new rule. Bournemouth was proof of that. 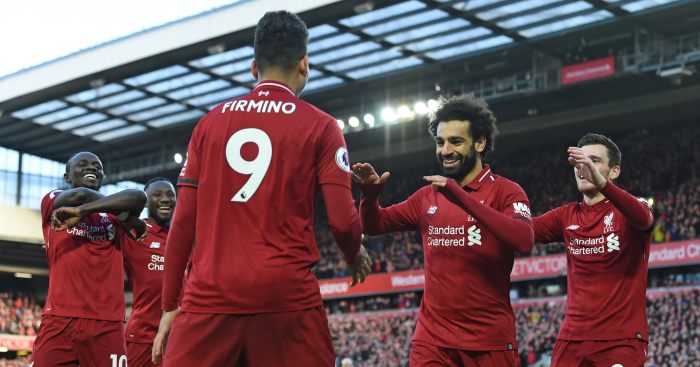 Manchester City battled to a 2-0 win over Everton to go top of the Premier League for the first time in 52 days, while Liverpool bottled their way to seven dropped points since early November.

The midweek message was clear: the reigning champions will take quite some shifting to relinquish their throne.

It took Liverpool all of three days to muster an emphatic response. After all the talk of them melting under the bright lights and heat of a Premier League title challenge, a comfortable 3-0 win over Bournemouth gives them a three-point lead with 12 games remaining.

It might not be the ten-point gap that was prematurely and giddily forecast ahead of the City game last month, but it is proof that draws with Leicester and West Ham were exceptions to the rule that Jurgen Klopp has implemented this season. And it is a reminder that City are still the ones who are having to try and keep the pace instead of setting it.

Not since Liverpool were sponsored by Carlsberg while winning Coca-Cola, Worthington and Carling Cups have the Reds been so intrinsically linked with the word ‘bottle’. A team that had the fourth-most points in Premier League history after 25 games was suddenly being framed as mentally weak and lacking in the durability required for a title challenge.

It was always a laughable reaction to the smallest of blips. But Anfield was the club’s nuclear bunker: the internal calm defied the external pandemonium.

“People talk about pressure because we haven’t been in this position before,” Andy Robertson said on the eve of a Merseyside visit from the Cherries, echoing the thoughts of both his manager and teammates. “But it’s February and everyone just needs to relax.”

Sadio Mane’s early goal, the forward nodding in James Milner’s cross, did more to settle the nervous of an anxious home crowd than anything else. Few of these players – and none of Saturday’s starting line-up – were tarred by the brush of 2014’s genuine title collapse, but every supporter still bears those scars.

Only at the headquarters of the FA will the goal have been celebrated with more glee. Their definitely, absolutely, undeniably real conspiracy to help Liverpool win the league has rather cleverly shifted from telling referees to award penalties to Mo Salah to instructing their linesmen to ignore marginally offside goals scored by Mane, whose forehead might possibly have been half an inch beyond Nathan Ake’s elbow.

But Liverpool removed the smallest of asterisks tentatively placed next to this victory with goals of true quality. Georginio Wijnaldum’s first-half chip over Artur Boruc was matched only by Roberto Firmino’s exquisite backheel for Salah to make it 3-0. After a slight stumble, the Reds were looking back at their devastating best.

Perhaps most pleasing for Klopp will be the performance of Keita. The midfielder was painfully ineffective against West Ham but benefited from the time and space Bournemouth afforded him at Anfield. It should boost the confidence of a player who has reportedly struggled to settle in his new surroundings.

The same cannot be said for Liverpool as a whole, who are treating their first Premier League title tilt in five years with serenity and tranquillity. They are approaching their position with more calm, composure and self-control compared to 2014’s fervent, impassioned, intense charge.

While others suggest that loaning out their third-choice right-back or failing to recall a player who has yet to make his Premier League debut could eventually cost them the crown, Liverpool will continue to ignore noise from the outside. Particularly as Milner was excellent against the dangerous Ryan Fraser on the right-hand side of the defence.

As it is, Liverpool have lifted any pressure that was on their collective shoulders and placed it squarely on City’s once more. The finish line will only come into full view in May, despite the short-sightedness of those who declare anyone’s race run by February.