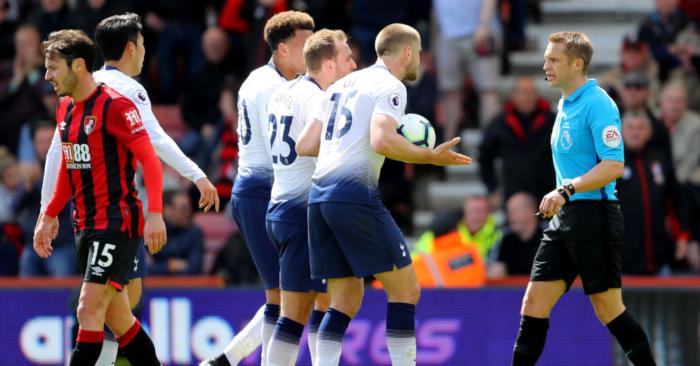 “When you talk about Tottenham, everyone says you have an amazing house but you need to put in the furniture. If you want to have a lovely house maybe you need better furniture.”

Or maybe just any furniture at all that doesn’t break if you put it under the slightest bit of pressure.

We’ve all been to somebody’s house, shaped to sit down and then been told “don’t sit there”, because that particular chair cannot ‘take’ the weight of a human person. Whether that ‘chair’ still deserves the noun is a question for a more philosophical day; when does a chair cease to be a chair and simply become an ornament?

Why does that person keep that questionable chair in their house? Because they have no other? Because they inherited it and are loath to part with it? Because they simply like it? Or because one day, somebody will stretch a metaphor to its breaking point when what they really need to say is that Tottenham have a fragile squad lacking in nous, intelligence and maturity and they desperately need an influx of know-how?

The weight of those quotes from Mauricio Pochettino is in danger of getting lost because he is talking about Tottenham and not Manchester United, but a man who has been fiercely loyal to his players has said in really quite strong terms that they are not good enough. “We need to rebuild. It’s going to be painful,” he said. It should be particularly painful for the truly woeful Eric Dier, last spotted going through the ankles of the truth from behind.

Pochettino knows that Tottenham have largely got away with it this season, when a combination of squad stagnation and World Cup fatigue has seen them perform at a level below last year, and several levels below the previous season when they were Chelsea’s closest challengers. Right now, they are 16 points and 21 goals adrift of their totals for 2016/17 with almost exactly the same squad. That they will go into the final weekend of the season with Champions League qualification in their hands – after a semi-final second leg against Ajax – is nothing short of miraculous. What logic tells us is that it cannot possibly happen again; that level of over-achievement is unsustainable.

Pochettino opting to play his strongest XI against Bournemouth was a clear message that he did not want to leave qualification down to the final day against an Everton side in the kind of form they can only covet. Said XI then conspired to trip themselves up in the most gloriously predictable way possible.

Bournemouth’s counter-attacking football was always going to trouble this Spurs midfield, and so it came to pass – Dier should have been sent off and arguably should have also conceded a penalty. He looks like a rugby player and too often plays like one. We can all have some sympathy for Son Heung-min – the one player usually immune to the petulance that runs through this Spurs side – but he reacted violently in frustration and the referee, perhaps mindful that he had not punished Dier, was justified in showing a red card. That Pochettino watched this unfold and then hauled off both Dier and the also-booked Toby Alderweireld told you everything; he knows that ill-discipline has a tendency to snowball in this team.

Unfortunately, Juan Foyth could wait little more than two minutes when he lost control of a challenge for the umpteenth time in his shortish Tottenham career. Should Spurs lose Alderweireld this summer – as seems likely – then the Argentine is nowhere close to being ready to make the permanent step up from his current position as fourth choice. When Spurs needed calm heads, Foyth offered a wild and high foot instead.

I think we may just have hit peak Spurs.

It looked like a gift for Spurs when Bournemouth had literally no idea how to score against nine men, but eventually they did find a way to inflict Tottenham’s 13th Premier League defeat of the season. That’s more than any Spurs side since the “how can you have two points from eight games?” debacle of ten years ago. Tottenham still somehow sitting third says rather a lot more about the struggles of Chelsea, Arsenal and Manchester United than any resilience under Pochettino. Their current points total would not have earned them fourth last season.

The majority of this Tottenham side are playing at the highest levels of their respective careers. And sometimes it shows. Especially at the end of a long season when all Spurs really had to do to seal Champions League qualification with a game to spare was keep their heads, be sensible, take the weight.