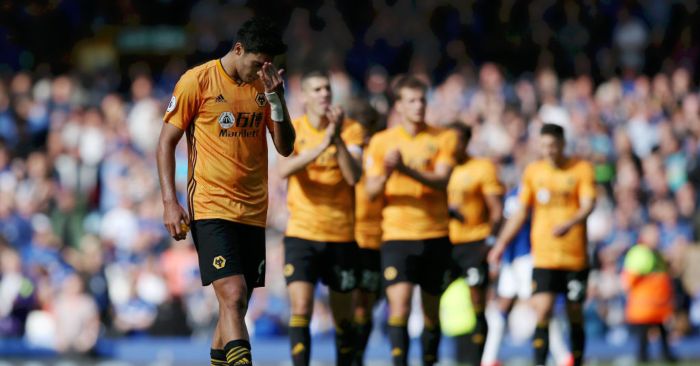 The last time Wolves went more than four league games without a win at the start of the season, they were managed by Dave Jones, Nuno was starting the campaign as back-up keeper for the European champions and ending it in Russia with Dynamo Moscow, and These Words by Natasha Bedingfield was number one in the UK singles charts.

Wolves, in truth, are the ones who need some help, some inspiration, but it’s not coming easily. Progress in the Europa League has been confirmed and should not be overlooked, but stagnation in the Premier League cannot be ignored either.

Bolton are the only other side of the 92 not to have led for a single minute in the league so far this season – and their excuses are far more convincing. Before their trip to Merseyside on Sunday, no Premier League team had had fewer shots. Watford (8) are the only club on a longer winless streak than their five.

Had they held on to the handlebars of this rollercoaster ride at Goodison Park at least once, their results in isolation would be far from cause for concern. Draws against an excellent Leicester, a volatile Manchester United, an in-form Burnley and an improved Everton would represent, if not strides forward from last season, most certainly not steps back.

Yet Wolves simply could not hold on – not at 1-1 or 2-2 – and only have themselves to blame. The mix-up between Conor Coady and Rui Patricio for the first goal, the overall slack defending for the second and the inability to either stop Lucas Digne’s cross or Richarlison’s header for the winner were basic mistakes, self-inflicted gunshot wounds that eventually proved fatal.

Wolves might take some solace in the fact they actually equalised twice; shots have been difficult to come by this domestic campaign, never mind goals. Before Sunday, no top-flight side had attempted fewer. Eight efforts on Jordan Pickford’s goal is progress at one end, undone by defensive stupidity at the other.

It is a curious dichotomy with their Europa League form. Nuno Espirito Santo’s side have taken to continental travel wonderfully, scoring 19 goals and conceding just four in six games.

The main difference has been control, and the complete lack thereof they have been able to exert in the Premier League. That they conceded within three and five minutes of their goals suggests a naivety, a complacency, perhaps even an impatience from a side that was built around both taking their time and chances last season. Wolves have never really embraced the chaos as they have never had to; it showed against Everton.

A team that forced opponents to play to their own strengths is now exemplifying its own weaknesses, snatching at shots, complicating matters in defence and misplacing passes. Ryan Bennett was the only player to complete more than 80% of his passes, while no-one created more chances than centre-half Willy Boly, whose suspension provided the vomit-inducing icing to a manure cake.

Wolves will improve. They have to. It is not that they are too good to go down, but that their foundations are too solid and their methods too proven for things to get much worse. Nuno just has to remember how to make these composite parts greater than the whole again.