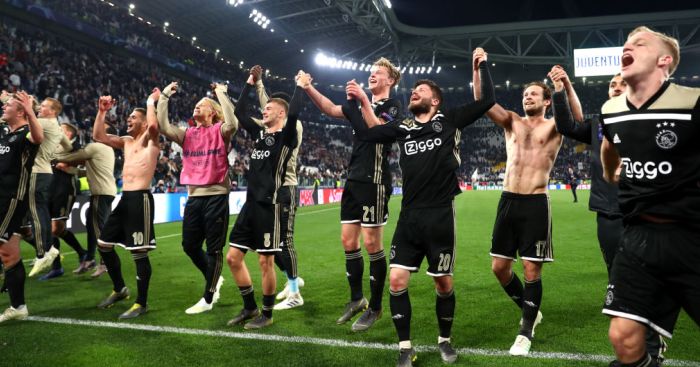 The Champions League isn’t meant to be like this.

As they had against Real Madrid, the Dutch side with the Championship wage bill had dominated the first leg against Juventus at home without getting the result they deserved. As against Real Madrid they just went and won the away leg in sensational fashion.

Tuesday night’s 2-1 win in Turin was every bit as impressive a performance as the 4-1 in Madrid. The narrower margin of victory and repetition should not dull the reaction. Juventus were remarkably lucky to lose only 3-2 over two legs in which a pair of Cristiano Ronaldo headers were the only significant chances they created against the Dutch upstarts.

The fact it’s Real Madrid and Juventus who have had their pants pulled down by Ajax only adds to the appeal: Real Madrid, the uncoachable collection of stars; Juventus, the team built entirely around one man brought in at eye-watering cost to deliver the one bauble that had been beyond the club’s reach.

Ronaldo is, in the best possible way, the greatest individualist in football. He had support at Madrid for sure, but they would not have dominated this competition as they did without him. At Juventus, he has at times stood almost alone.

It may be simplistic to say that Ajax’s success over these last two ties has been a triumph of the collective over the individual, but there is something in it.

Ajax are already the best Champions League story in years. Liverpool were great last year, but being English brings its own advantage. Monaco were so much fun in 2017, but they had Dmitry Rybolovlev’s billions.

Atletico Madrid were upstarts once but now part of the European furniture. Ajax are something else, something purer and something better: a team embodying Johan Cruyff’s maxim that ‘I’ve never seen a bag of money score a goal’.

Two of Europe’s richest teams dispatched, two more to go. And that must now be the goal. So utterly and thoroughly demolished have Real Madrid and Juventus been over four games that it’s pure silliness to think this Ajax team can’t sustain it for three more. Especially as at time of writing two of those could at least in theory be against Tottenham.

And while this Ajax team may be far more than the sum of its parts, that sum total is growing by the match. This is not just about the academy products, although lord knows that helps, but about the sort of clever and – inevitably – fortunate buys along the way.

When Ajax paid Southampton £10million for Dusan Tadic, nobody paid much attention. The arrival of Mohamed Elyounoussi from Basel had left Tadic surplus to requirements at Southampton, with those reports that offered any view at all generally reckoning the Saints had done well to get an eight-figure fee for the Serbian.

Nine goals in 15 Champions League games later – Elyounoussi still awaits his first in the Premier League – and it’s probably just about fair to say Ajax have done the better business.

While nobody at Ajax – or even the man himself – could have ever expected Tadic to do what he has done this year, it is indicative of the world in which the club operates and the sharp contrast with where they now find themselves. A player unwanted by a bottom-half Premier League club, and not particularly sought after by any of the others once available; yet here he is, playing in Europe’s most exciting side and three matches away from the ultimate prize.

But Champions League football is not meant to be like this. Even as this Ajax side continues its faith-restoring journey towards what could yet be something truly historic, the rug is already being pulled from beneath them. Frenkie de Jong, the star of the first leg, will be a Barcelona player next season; the inspirational captain and disgustingly young Matthijs de Ligt, match-winner in Turin, will surely not be an Ajax one.

Ajax will have to go back and start from the bottom of the mountain again. But they could yet reach the summit before that inevitable descent.