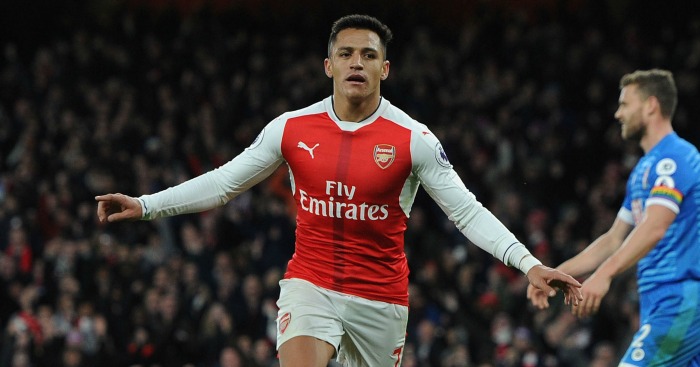 Since the end of August, Arsenal have netted 25 league goals. Sanchez has scored eight of those and assisted a further three, all from an unfamiliar position as a false nine designed to get him even more involved in the game. His two goals against Bournemouth may have been served on a plate by Steve Cook and Olivier Giroud, but there are few better ‘anticipators’ in world football than Sanchez. He is the Premier League’s king of ‘right place, right time’.

Sanchez’s match-winning performance against Bournemouth was all the more impressive given his obvious physical struggles. Arsene Wenger last week had to refute claims that he had given Sanchez injections to play with a tightness in his hamstring, but this is a patched-up player running on the fumes of an outrageously high bank of energy. Wenger also rejected the notion that he forced Sanchez to play, and I believe him. The difficulty is not getting Sanchez on the pitch; it’s getting him off it. He is a manager’s dream.

The overall performance was far from faultless, but Sanchez scored twice, had another shot expertly tipped onto the bar and created five chances (two more than any other player). Granit Xhaka had the most touches of any player with 76, but Sanchez was just two behind despite playing as a forward; thirty-six per cent of those touches were more than 40 yards from goal. Even when physically drained, he demands to be involved. Sanchez has two settings: Off and full speed.

“Even when he looks dead, he is still alive and always finds the resources to do something special when you win the ball back,” said Wenger after the game. “He has that gut feeling to find that extra gear to be dangerous when ball comes to him.”

He does indeed, but this cannot last ad infinitum. Following eight international matches this summer, no Arsenal player has played more outfield minutes in the Premier League. Sanchez has only missed 17 minutes of Champions League football too, and has played five games for Chile in South America since August.

Since August 2014, a month after joining Arsenal off the back of the 2014 World Cup, Sanchez has played 146 matches for club and country. That averages out at one game every 5.8 days without any break. It’s a ludicrously heavy schedule for any player, let alone one with the vigour of Sanchez.

And so back to that unsigned contract, and a headache for Wenger and Arsenal. Like Luis Suarez at Liverpool, the leading role Sanchez plays in Arsenal’s team makes his manager so anxious not to rest him.  The example set by Sanchez makes it almost impossible not to rely on him. His departure would leave a gaping hole that very few players in Europe could fill; £250,000 a week might seem cheap in hindsight.