The two Brazilians hit the ground running on their Arsenal debuts... 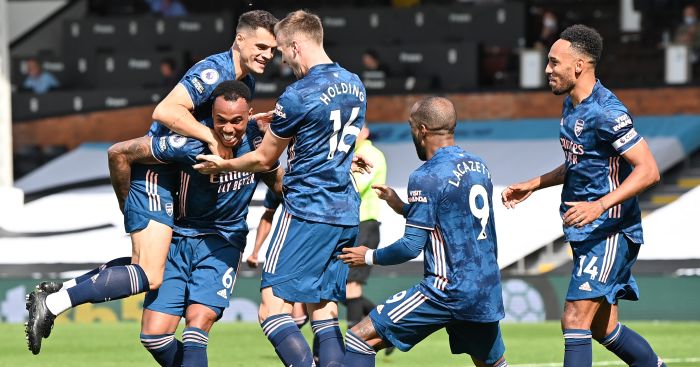 Brazilian duo Gabriel Magalhaes and Willian settled in perfectly as Arsenal kicked off the Premier League season with a 3-0 victory over Fulham on Saturday afternoon. It was an impressive display by Mikel Arteta’s side as they carried on the form that saw them win the FA Cup and Community Shield in August.

The Gunners entered the match against Scott Parker’s men on a five-match unbeaten run carried over from the back end of last season, while they had only lost twice in their last ten fixtures. There were signs in the final couple of months of the 2019/20 campaign that Arteta was starting to get his message across and the cup wins that followed are evidence of that. The Spaniard is starting to foster a winning culture in one half of north London as the Gunners rise gradually from their Premier League slumber.

While London rivals Chelsea were splashing the cash on numerous new big-name arrivals, Arteta chose to pluck Willian from them on a free transfer. Unable to get the Blues to agree to give him a three-year deal, the 32-year-old was instead “wooed” by Arteta and the “project” he has planned at the Emirates Stadium. Willian’s agent Kia Joorabchian was not the first to talk about the Arteta factor with Gabriel also picking out Arsenal’s “new project” when asked about his reasons for joining.

Gabriel signed for the Gunners for a fee in the region of £22m as the club’s main marquee signing so far this summer. There is a lot of pressure on the 22-year-old to hit the ground running with Arsenal struggling to find a solid centre-back partnership. The likes of Sokratis, Shkodran Mustafi and David Luiz have all tried and failed recently, while Rob Holding has shown potential at times. And Holding was given a run-out against Fulham as Gabriel produced an assured display alongside the former Bolton Wanderers man.

The Brazilian’s opening away day could have seen him as our Early Loser after an early miscommunication with Bernd Leno giving Aboubakar Kamara a chance to score early on. However, Gabriel dodged that particular bullet to put in a dominant display on his Premier League debut. The normal fragility at the back wasn’t on display today and that was down to Gabriel. His composure, steel and confidence on the ball seemed to be infectious, with his team-mates growing in confidence around him. The power and aerial ability he demonstrated against Fulham will be useful tools as he gets acclimatised to the English game.

Gabriel, who had more touches (121), attempted more passes (113) and completed more passes (107) than anyone else on the pitch against Fulham, got himself on the scoresheet on 49 minutes too. He converted a corner from compatriot Willian by heading the ball onto his shoulder and into the net. Willian got an assist for all three goals as he joined his new Arsenal team-mate in looking like a brilliant signing. Of course it was against a side tipped to go straight back down to the Championship but Willian looked dangerous throughout.

On his arrival, Arteta hailed Willian as “a player that can really make a difference for us”. And boy did he show that on his first outing, becoming the first player to assist two goals on his Premier League debut since Ray Parlour in August 1992, before adding a third assist for good measure. The former Chelsea man hit the post with a free-kick in the first half too as he menaced Fulham’s woeful backline. In 36 Premier League matches for Chelsea last season he only managed seven.

It was just one match but there was a different feel watching this Arsenal. They were less panicky, more confident in their play and didn’t stop pressing until the final whistle. Most of the credit will rightly go to Arteta for that but the two Brazilians certainly look like shrewd additions.